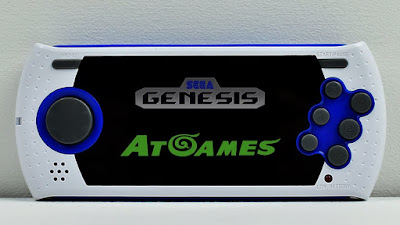 The Legends Ultimate Home Arcade features more than 250 built-in arcade and home games, including a range of classic Disney and Star Wars game properties and other legends from iconic publishers. As a full-sized home arcade machine, the Legends Ultimate Home Arcade offers a gameplay experience like no other. Each game plays just like at the arcade thanks to an authentic control panel that features a matching set of premium joysticks and six buttons for two player fun, a trackball controller, and a built-in, low latency, high definition LCD. The built-in software is similarly impressive, with scan line filtering, an intuitive menu system, save and resume game functionality, and the ability to rewind a game in progress to recover from a play misstep.

The Blast! series of plug-n-play micro-console and wireless controller bundles feature a curated selection of classic titles unique to each model. Every Blast! includes high definition video output, an intuitive menu system, save and resume game functionality, and the ability to rewind a game in progress to recover from a play misstep.

“These new products offer families everywhere a way to experience some of the greatest classic Disney and Star Wars games in unique ways,” says Dr. Ping-Kang Hsiung, CEO of AtGames. “We’re delighted that Disney and Lucasfilm’s iconic properties are a key part of this exciting line-up of family-friendly products.”