Movie Review: The Case For "On The Basis of Sex" is That It's A Really Good Movie

Out of Four
Ruth Bader Ginsburg (Felicity Jones) is a first-year student at Harvard Law. When her husband Martin (Armie Hammer), a second-year student, falls ill with cancer, she attends both her classes and his, taking notes and transcribing lectures while caring for Martin and their infant daughter Jane.

Two years later Martin, his cancer in remission, is hired by a firm in New York. Ruth petitions Dean Griswold (Sam Waterston) to allow her to finish her Harvard law degree with classes at Columbia, but he insists on following policies at the time and denies her request, so she transfers to Columbia. In spite of graduating at the top of her class, she is unable to find a position with a law firm because none of the firms she applies to wants to hire a woman. She takes a job as a professor at Rutgers Law School, teaching "The Law And Sex Discrimination". Ruth finds herself trying to inspire the next generation to change the world, frustrated that she's not been allowed the chance to fight the battle herself. But that may change with the case of Charles Moritz, a man a man from Denver who had to hire a nurse to help him care for his ageing mother so he could continue to work. Moritz was denied a tax deduction for the nursing care because a he was a unmarried man, and the law the law assumes a caregiver to be a woman. Ruth sees in this case an opportunity to begin to challenge the many laws enacted over the years that assume that men will work to provide for the family, and women will stay home and take care of the husband and children. She believes that if she can set a precedent ruling that a man was unfairly discriminated against on the basis of sex, that precedent can be cited in cases challenging laws that discriminate against women. 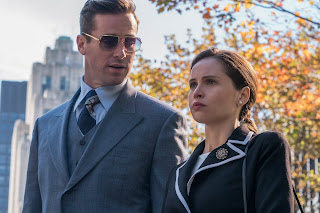 On The Basis of Sex is very much a formula, inspirational courtroom drama that sticks to the textbooks. It's nothing groundbreaking in any way, but it is very capably crafted by a solid veteran director, Mimi Leder (The Peacemaker, The Peacemaker, Pay It Forward), who is smart enough to let her cast do a lot of the heavy lifting. There has been plenty of criticism that that Felicty Jones and Armie Hammer are too whitebread to play Ruth and Marty, and there's no denying that Hammer seems to be making something of speciality out of this (having played a Jewish man in Call Me By Your Name). But the fact remains that Jones nails her performance and her Brooklyn accent, and is completely convincing in the role. Natalie Portman, who was originally supposed to star, would have had the benefit of actually being Jewish, and would have brought a lout of power to the character in the courtroom, but Jones has a more natural, vulnerable presence that makes Ruth more accessible. Hammer may look like a Ken doll, but he is so intensely likable as Marty and the movie so perfectly captures the dynamic portrayed in the wonderful documentary RBG that it's hard have any serious complaints. Cailee Spaeny (Pacific Rim: Uprising and Bad Times at the El Royale) is a big scene stealer as the couple's daughter, Jane, and Justin Theroux shines as the arrogant and some what cynical but that doesn't always mean he's wrong ACLU attorney Mel Wulff. It's a shame that the great Kathy Bates really only gets an extended cameo as Dorothy Kenyon, a civil rights lawyer who Ruth looks up to. The lack of great star vehicles for Bates since her star making performance in Misery is a testament inequality in Hollywood and how difficult it is to sell a studio (or the public) on anything starring a woman who doesn't look like a super model or a bad ass warrior princess.

Daniel Stoepleman's script is full of memorable dialogue, even if it sticks to the tropes of the genre, and if anything the biggest complaint with this movie is that it wraps up far to abruptly (and too early. We would have welcomed another our, and we found ourselves wishing this was a miniseries so we could spend more time with these people and follow every glorious triumph of Ruth's career). The musical score by Mychael Danna is one of the most underrated of the year.

On The Basis of Sex isn't a truly great film, and certainly not a monumental one. But it's a very solid one, and admirers of Notorius RBG who are also very open about being suckers for an even moderately well done courtroom drama, we easily found it in it's favour. It may not be worthy of the praise of the documentary, but if you are looking for a good docu-drama, this is certainly a stronger one than Bohemian Rhapsody.