"Welcome To Marwen" Is Touching and Imaginative, If Sometimes a Little Strained 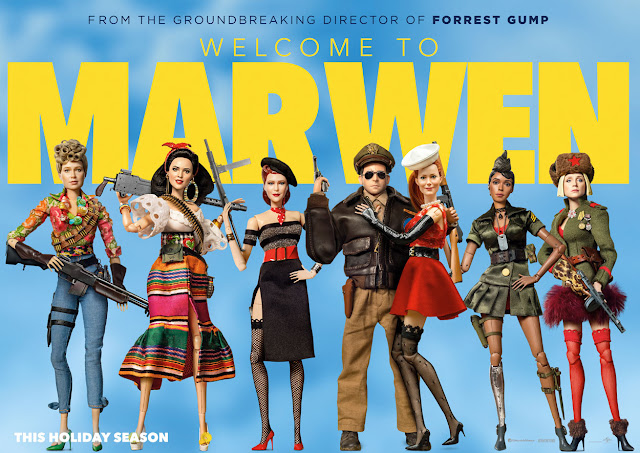 The story of artist Mark Hogancamp is captivating and utterly unique, and if you're not familiar with it it's likely to seem unbelievable bizarre.  On April 8, 2000, Hogancamp was assaulted by a group of men outside of a bar in Ulster County, New York. Mark was beaten so severely that he lost all memories of his personal life before the attack and suffered severe Post Traumatic Stress Disorder. A professional illustrator, he also lost the ability to draw. Mark dealt with this trauma in an extremely unusual way: by creating an elaborate World War II era Belgian town in his yard and populating it with dolls, one representing himself, most of the rest representing women he knew, and a few Nazis that would terrorize them. Yes, really. His photographs of the village he created became celebrated works of art, and the elaborate stories of life in Mark's village are astonishing. Mark's story was told superbly in the 2010 documentary Marwencol, and the idea of turning it into a mainstream Hollywood narrative probably wouldn't occur to anyone but Robert Zemeckis, the special effects wizard who has often used his skills to tell offbeat character oriented stories and developed an obsession with motion capture about the same time Mark developed one with dolls. And while the film is at times a bit too strained to work perfectly, it's still in its own way an inspired match of director and material that marks perhaps the most unusual major studio release of 2018.

Steve Carrell plays both the real world Mark and his fantasy counterpart, Captain Hoagie, a military aviator who is the sole male inhabitant of the village of Marwen. His female companions are his friend Roberta (Merrit Wever) from the doll store; his Russian caregiver (Gwendoline Christie); a friendly co-worker (Eliza Gonzalez); the physical therapist who aided with his recovery (Janelle Monae);  his favorite "actress" (Leslie Zemeckis) and a new addition, Nicol (Leslie Mann), the woman who moves in next door. The Marwen versions of these women are machine gun toting women of action who are utterly devoted to Hoagie. They're not intimidated by the group of Nazis (lead by former Legends of Tomorrow co-star Falk Hentschel) that plague the village, but everyone  is scared of Deja Thoris (Diane Kruger), the Belgian Witch of Marwen, a mysterious and powerful magical being, and at this point we feel the need to remind you that the only part of this that's not straight from real life is that Nicol is a composite of various other women from Mark's life.

This is an incredibly challenging story to tell, especially as a mainstream Hollywood crowd-pleaser, and from time to time the strain threatens to overwhelm the film (especially when it is trying too hard to be funny). But Zemeckis' technical virtuosity combined with his sensitivity and skill with actors come through to make something that is sweet, involving and touching, if not 100% satisfying.  Carrell gives a strong performance, though he can't completely disappear into any role any more because memories of Michale Scott are just too strong and his improvisational brilliance indelibly lnked him to that character (this was at least as big a problem in his transformative role in Foxcatcher as it was here). Carrell and Zemeckis' version of Mark is somewhat sweetened and softened from the real person, a very complex and not always easily lovable figure, though Zemeckis is to be commended for including some of the less overtly clean cut aspects of his personality.


Where Marwencol draws much of its fascination from the fact that we can'[t quite find our way into Mark's head, Welcome To Marwen  by its nature requires seeing the world from Mark's point of view, and softening the character was probably necessary to make it easier for us to do that, and certainly to make it the kind of bittersweet feel-good movie Zemeckis excels at. The director seems to be trying to create sort of another Forrest Gump here, and just as Steven Spielberg has never been able to quite hit the bull's eye when trying to recreate the childhood magic of E.T., Zemeckis can't quite capture the assured brilliance of his Oscar-winner. But as with the Spielberg films, it's quite a bit better than its harsher critics suggest, and if appreciated for what it where it succeeds rather than where it fails, there is a lot to love here. Zemeckis throws in some self-referential moments which are a bit forced (though the biggest one is actually very true to Mark's story), but which to us seemed to be suggestion that the director connected and related with his subject.

Carrell is ably supported by his female co-stars, though most are fairly one dimensional roles, with the exceptions being Mann and Weaver. Mann is more than solid, making Nicol and character in her own right rather than just part of Mark's fantasy, and Wever is a delight as Roberta, a low key and extremely likable character whose fondness for Mark suggests the possibility of more than friendship. She elevates the role without ever milking it or trying to steal scenes, and we were leftreally  hoping to see more of Wever in the future. Janelle Monae and Gwendolyn Christie shine inside Marwen, but the script really lets them down in the real world.

As always, Zemeckis gets stellar work from his usual crew, with the addition this time of a new cinematographer, C. Kim Miles.  Alan Silvestri's score is alternately emotional and terrific fun, with some great nods to Elmer Bernstein in its military themes.

If Welcome To Marwen not quite the full-on Zemeckis classic we hoped for, it's also not even close to the disaster the harshest reviews are calling it. It's an imperfect but affecting fantasy drama that offers many pleasures and produces genuine feelings of both joy and sadness. It's a must see for Zemeckis fans.