Quint To Premiere On Christmas Day. The Christmas Jaws-ternative to the queen’s speech 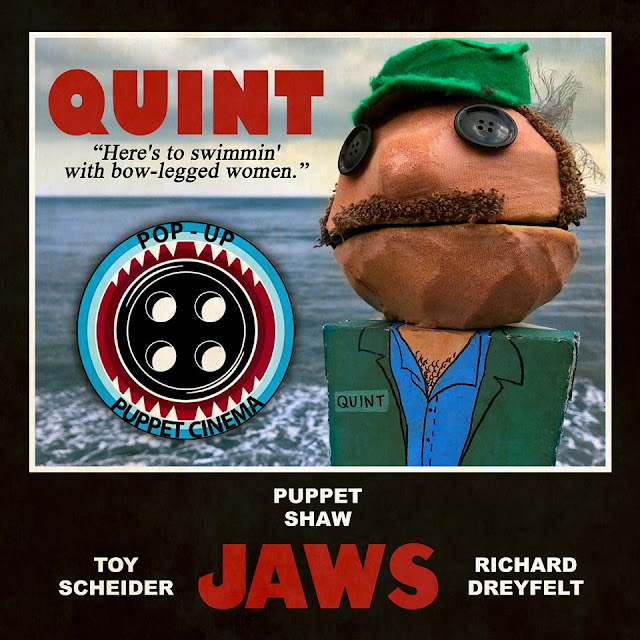 We all know that Jaws the Revenge (1987) is a Christmas film (it is, trust us) but one of the most famous scenes in the Steven Spielberg original, Quint’s USS Indianapolis Speech, has now been re-imagined with a Christmas angle.

It’s come courtesy of a collaboration between the world’s greatest Jaws site, The Daily Jaws, and Pop-Up Puppet Cinema - think Punch and Judy with a popular film twist.

The result is a four minute tour de force that sees a puppet Quint telling a puppet Brody and Hooper about 1100 elves are attacked by reindeer ‘with black lifeless eyes’ on Christmas Eve, 1945. It’s a festive riff on a seminal moment in Jaws, originally delivered masterfully by Robert Shaw.

Ross from The Daily Jaws, said: “We wanted to deliver a festive fun message that was an alternate to The Queen’s Speech, so The Quint’s Speech was the obvious choice. It’s so well-known and adored by Jaws and film fans worldwide that we knew this Christmas twist would be well received. It’s been great to partner up with Pop-Up Puppet Cinema to bring it to life.”

The scene in the original film takes place on board the Orca, Quint’s boat, at sea and rather fittingly this Christmas spin on the classic was also shot on the water.

John from Pop-Up Puppet Cinema said: "We're huge fans of Jaws and have been performing our puppet adaptation across the UK for a couple of years now, so when our friends at The Daily Jaws asked us to collaborate on a Christmas interpretation of one of the greatest movie speeches of all time we couldn't resist."

The star of the piece, puppet Quint, also had this to say - "Personally I've not much time for puppeteers! They've got soft hands, city hands!"

The Daily Jaws has over 50,000 followers, making it the world’s largest cross-platform online Jaws community (not a bad record for this vicinity).