Movie Review: "Crimes of Grindelwald" Will Please Fans, But Muggles May Struggle 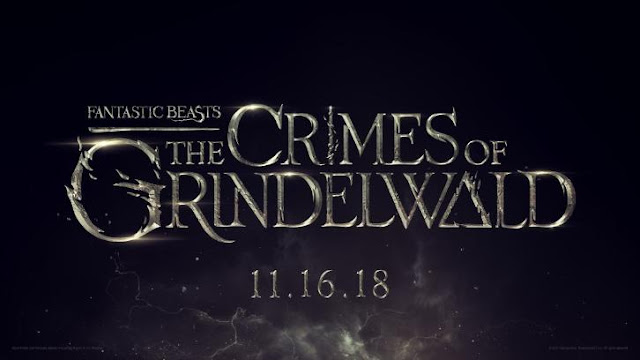 
At the end of Fantastic Beats and Where to Find Them, Percival Graves, Director of Magical Security for MACUSA ((Magical Congress of the United States of America) was revealed to be the powerful dark wizard, Gellert Grindelwald wearing a Colin Farrell disguise, and it set off a trend of discovering that Johnny Depp was actually the bad guy in films such as Black Mass, Murder on the Orient Express, and in real life. Grindelwald was captured by MACUSA, with the help of Newt Scamander (Eddie Redmayne).

As Fantastic Beasts: The Crimes of Grindelwald opens, Grindelwald escapes custody again and sets about gathering followers, most not truly aware of his true agenda: to raise pure-blood wizards and witches up to rule over all non-magical beings. Meanwhile, our hero, Newt, finds himself banned from international travel, and his Auror brother Theseueus (Callum Turner) is trying to get him to join the Ministry of Magic (the ministry is keen to get enlists the aid of a wizard who successfully fought and captured Grindelwald once before), but it's a  prospect that the young magizooligist finds completely unappealing. But the ministry are not the only ones asking for Newt's help: Albus Dumbledore (Jude Law), the Defense Against The Dark Arts teacher at Hogwarts, approaches his former student to go after Grindelwald, which  - for reasons he won't explain - Dumbledore cannot do himself.  Newt reluctantly agrees, and soon finds himself caught up in complex, world changing events as lines are drawn. Love and loyalty are tested, even among the truest friends and family, in an increasingly divided wizarding world.

There is a lot going on here, and it's clear that J.K. Rowling is still far more comfortable writing epic novels rather than screenplays. There's a lot to cover, and as such, the movie can't take time for the uninitiated.: where the last film made some effort to play to less hardcore Potterverse fans, that goes out the window here. But while critics are finding that off-putting, fans are likely to feel just the opposite: the feeling of being a far more overt and interconnected prequel to the Harry Potter series is at times very exciting for those who have already invested so much time, imagination and emotion into the franchise at large.

The obvious comparison here is Avengers: Infinity War, in that neither film stands on its own as a story, neither film likes to slow down to catch a breath, and both largely assume that at this point if you're in the theater, you are won over and know everything you are supposed to. The advantage Marvel had was that the bulk of the important characters had been given a minimum of two hours previously for you to get to know and care about them, even if some of them had very little to do in that film. Crimes of Grindelwald is busting at the seams with characters, many of whom are new, and it is easy to become overwhelmed and confused. There's also the same obstacle that the first Fantastic Beasts faced, namely putting a huge emphasis on introducing creatures we've never seen before and casting a world class mumbler (Redmayne) doing a character voice in the role of the only person who knows and can explain their names and traits (if you want a heads up in order to better understand, here's some useful info that acquaints you with the creatures and explains them without spoiling any plot points).

On the plus side, unlike Infinity War, the events in this film have some level of permanence to them, and while the plot is confusing, it is also often very compelling. Redmayne's Newt Scamander is that rarest of rarities - a genuinely unique hero - and it's hard not to care about what happens to him. This movie goes further into portraying the character's monomania, and while Rowling has never stated that Newt is somewhere on the autistic spectrum (which has been discussed and speculated about among some fans), the first film gave plenty of reason to suspect it and this film doubles down on it. We frankly love this, and as uncles of autistic children we'd love to see this openly declared and celebrated. Redmayne is hardly left to carry the film on his own, with his strongest support coming from Jude Law's superb and engaging portrayal of Dumbledore. Zoë Kravitz shines as the mysterious and much anticipated Leta Lestrange, but Katherine Waterston's criminally under appreciated Tina Goldstien is not given enough to do (though she is a very welcome presence when she is on screen). Much the same can be said of Dan Fogler and Alison Sudol as Jacob and Queenie, though they are at least given a significant subplot. Still, Jacob isn't even close to the equal lead he was he was in the first film, and the all important outsider's perspective that Rowling has always relied on to spoon feed explanations to her audience is definitely lacking in this one.

For many, the most iffy element going into this film is Johnny Depp. When the rumors were coming out that he might appear in the last film, those of us who were openly sick to death of his persona were not at as plentiful as those who swooned over every very minor variation on Jack Sparrow and wanted to bear his child. But in the short time since it was released, he's alienated enough people to raise the very real concern that his presence would be a stumbling block for audiences. As people who quite honestly went in expecting to hate him in this, we are rather pleased to say that he really works in the role. He is very much in his element in playing someone who is both enigmatic and larger than life, but Rowling and director David Yates succeed at reining him in, and his performance actually serves the story instead of the story serving his performance.  It's almost enough to give one hope that his bag of tricks isn't as utterly depleted as everyone is finally thinking it to be. If anything, the extremely mixed feelings many of us have for this once beloved superstar actually add to the character's mystique, and we're going to stick up for him on this performance if for no other reason than the fact that we know it will only be a matter of time before we're trashing him again.

Grindelwald does actually recall another Johnny Depp character, but it's not Captain Jack, it's Donald Trump (whom he played in the Funny or Die special The Art of the Deal). Anyone who knows Rowling's politics and put two and two together should notice certain parallels in the dark wizard's recruitment of zealous followers through rallies and spreading fear, but it's approached with enough subtlety that it never feels like grandstanding. Rowling created the character and all of the major elements long before the current administration, and she's not stretching to find a connection. It's very much akin to the Emperor Palpatine/Dick Cheney similarities of the Star Wars prequels. (If you' are a staunch conservative and feel offended by these comparisons, feel free to skip over the previous paragraph).


This film is quite dark at times, and plays a bit like it's trying to be an Empire Strikes Back type middle chapter (though there are supposedly five films planned). It also features some big surprises. Director Yates and his team once again makes good use of how much digital technology has advanced since Harry Potter and the Philosopher's Stone/Sorcerer's Stone came along 17 years ago, and the beasts are truly fantastic. Everything about the design is up to the Oscar winning standard's of the first entry,

The Fantastic Beasts series is never going to be the game changing powerhouse that Harry Potter was (especially since it lacks the "You know - for kids!" hook), and regardless of  box office success it may well be destined to be mostly unappreciated in its time. But for those of us who can never get enough of the world that Rowling created, these movies deliver and will have a place in cinematic history (especially once the millennial generation of film critics, most of whom will have grown up as Potterfiles, takes over). And there is no doubt that fans will leave this entry breathlessly anticipating part three