Movie Review: "Bohemian Rhapsody" Is Not The Real Life, It's Just Fantasy 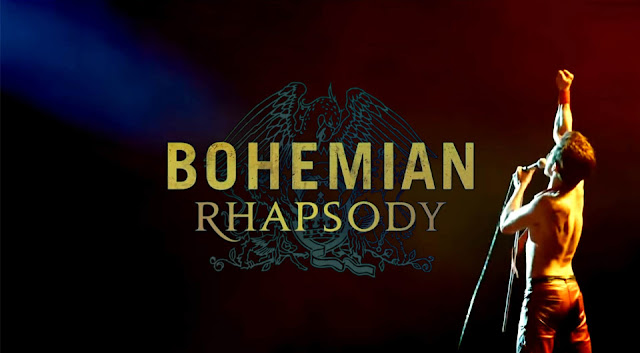 Perhaps the only major Hollywood release this year to arrive in theaters carrying more baggage than Solo: A Star Wars Story, the Freddie Mercury biopic Bohemian Rhapsody has been plagued by reports of a tumultuous set, the firing of its brand name director Bryan Singer, and the subsequent fresh sexual misconduct allegations against him that anyone who could put two and two together knew were coming as soon as news of his firing broke. The movie has had one thing going for it, and that is the fact that the trailers have been gleefully greeted by excited audiences (though they have been so overplayed that you may feel that you've already seen the movie. And you'd more or less be right.).

During the early 1970s, aspiring songwriter Farrokh "Freddie" Bulsara (Rami Malek) just happens to run into two members of a band he's been following, Smile, literally just moments after their lead singer quits. Initially, they dismiss Freddie due to his comically over sized front teeth, when he confidently sings for them right there on the spot, they know they have something and once they easily find a new bassist, they have themselves a new band, which they call Queen. This is an almost perfect recreation of the real life events surrounding the formation of the band, apart from every single solitary detail, which is made up. But one goes into such a film expecting a certain amount of artistic license to be taken in favor of storytelling and flow.


The band then goes to play a number of gigs until finally they are approached with an offer of management from John Reid (Aidan Gillen), Elton John's manager. Before long, they have signed with EMI Records, and Freddie (who has changed his surname to Mercury) proposes to his girlfriend Mary Austin (Lucy Boynton, who already gained some experience playing a muse for rock musicians in John Carney's delightful Sing Street). Pretty soon, Queen and Freddie Mercury are on a rocket ship to super stardom and numerous montage sequences. But it all comes at a price: Freddie must struggle with vague allusions to homosexual debauchery and drug use while making sure to keep it all safely PG-13, and eventually that takes its toll on him.

For all of the money and hype behind the film, Bohemian Rhapsody is a by the numbers made for television movie that wandered onto the big screen. It's highly watchable entertainment in the same way that Believers: The Monkees' Story, Inside the Osmonds and Come On, Get Happy: The Partridge Family Story were, but it doesn't really have anything more to offer than those films did apart from slicker cinematography and sweeping overhead shots of a stadium filled with CGI music fans.


Rami Malek gives the role of Freddie everything he's got, and he pulls it off despite the handicap of the ridiculous set of false front teeth that must have seemed like a good idea. Mercury was known as "Bucky" in school, and he did indeed have a pronounced overbite due to  four extra teeth at the back of his mouth (which he credited with creating the special sound of his voice) and the filmmakers were in a tough spot on exactly how to handle this. Unfortunately, the result of the make-up department's efforts means that every time Freddie kisses someone, you are certain they are setting up a visual gag wherein they pull away from each other only to have the falsies stuck to the other person's teeth. Seriously, this movie may do for Chiclets what E.T. did for Reeses Pieces. During some of the concert sequences, instead "Ay-o!", we kept expecting to hear this sound.

The rest of the band is ably played by Gwilym Lee, Joe Mazzello (Tim from Jurassic Park) and Ben Hardy, who are all very likable and natural. Despite the emphasis on Freddie, it's hard not to leave feeling that guitarist Brian May is a great musician in his own right, bassist John Deacon was a funny guy who contributed his own creative voice, and drummer Roger Taylor had blond hair.

A big part of the movie's shortcoming has to be attributed to the screenplay by Andrew McCarten. The writer of The Theory of Everything and Darkest Hour is becoming known for taking dramatic license to an extreme (the Churchill on the London Underground sequence in Darkest Hour being perhaps his most infamous offense), and here he has taken some really major liberties. But the direction (and possibly the switch combined with studio input did not help) has to also take some blame for the rushed and often very misguided portrayal of Freddie's sexuality. By attempting to keep a teen friendly rating, the singer's controversial sex life has been reduced to a lot of leather clad and mustachioed innuendo, and the result is a cursory portrayal of the gay community in the 70's and '80's that comes across as uncomfortably homophobic. The only gay character who is both sympathetic and doesn't loathe himself is clearly contemptuous of much of the community. Some of the problem comes in trying too hard to aim for a teen friendly rating.  Personally, it's not that we wanted the drugs and sex to be portrayed with the kind of graphic brazenness of Oliver Stone's The Doors, we just wanted a sense of honesty.  Instead all we get in leather, moustaches and leering, and the sad fact that it comes off as far more judgemental of the gay community as a whole then was likely the intent is easily the film's biggest failure.

There is so much to complain about and pick apart in this movie that it's easy to make it sound far worse than it is. It's briskly paced, well shot and well staged with a solid cast (Mazzello and Tom Hollander as the band's second manager, Jim "Miami" Beach were our personal favorites.). And the praise that the Live Aid sequence is getting is so well deserved that we do feel tempted to put down the money to see it once in IMAX. In many ways, Bohemian Rhapsody is this year's Greatest Showman: a rousing crowd pleaser that plays fast a loose with the words "true story" and is sure to please audiences more than it does critics (though compared to that film, this is one is painstakingly honest documentary.).

Bohemian Rhapsody is a highly flawed piece of entertainment, but it is indeed entertaining if you can get past all of the missteps.