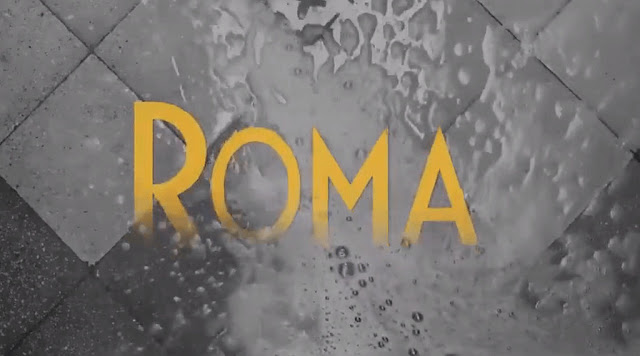 Written and Directed by Alfonso Cuarón

Director Alfonso Cuarón has become a big name in Hollywood. He has taken us to Hogwarts School of Witchcraft and Wizardry, to a dystopian 2027,  transported a Dickensian classic to present day New York, and to outer space (winning a Best Director Oscar for Gravity in 2013). But as a filmmaker, he hasn't taken us to his homeland of Mexico since 2001, when he made his mark with the acclaimed Y Tu Mamá También. But he's going back now, with his most personal film to date, Roma, which received The Golden Lion at the Venice International Film Festival.


The year is 1970, and Cleo (Yalitza Aparicio) is a maid living in Mexico City's Colonia Roma District.  She works for a well to do family: Sofia, her husband Antonio, their three young children. Cleo cleans, cooks, takes the kids to and from school, serves them meals, puts them to bed and wakes them up every morning, and she is loved by the children. Sofia and Antonio appreciate Cleo when they remember to, but they have problems of their own, including a very strained marriage. Cleo soon finds herself faced with a life changing obstacle when her relationship with a young man named Fermín results in her becoming pregnant and unwed.


Roma is a quiet, character based film that is a semi autobiographical take on Cuarón's upbringing in Mexico City (Cleo is based on Liboria “Libo” Rodríguez, who raised who raised him from the time he was 9 months old.)  It's the antithesis of "high concept", and isn't easily summarized in a log line. It's a film that relies on creating a mood and pulling you in to caring about its central character from the first time she comes on screen, and it does so perfectly without any flashy tricks. Cleo is the most human lead you will see in any film this year, and she's a beautiful soul. She remains quiet but steadfast throughout the difficulties she faces and ultimately may be the most genuinely strong woman we've seen portrayed on film in some time, not because she is perfect but faces every day and every hardship without letting it take her down, and her indelible bravery is made all the more poignant by the fact that she does have plenty of fears.


Yalitza Aparicio has not only never carried a feature film, she hasn't really acted before. We've seen the tactic of casting a non actor in a leading role lead to mixed results this year (while The Rider earned praise for Brady Jandreau's natural believability and realism, the awkward, wooden performances from real life heroes in Clint Eastwood's The 15:17 to Paris will go down in infamy). Cuarón's skills as a director and his love of the character deserve some of the credit, but Aparicio is far more than a prop. It helps that Cleo is not exactly dynamic: even as you are pulled into watching the movie from her point of view, it's not a matter of feeling that she's you. Cleo is that soft spoken, nice person you know and take for granted, the kind who is never the protagonist and seems like a supporting player even in her own life and yet has touched more lives with her goodness and dignity than she will ever realize, and the chance to see life through that person's eyes is really unique. 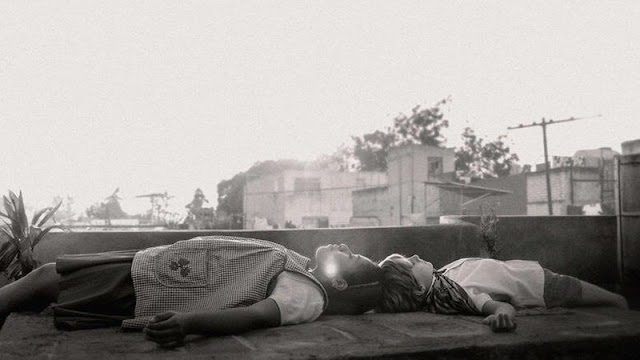 The term masterpiece is thrown around far too casually in reviews, and it is one we compulsively avoid. But Roma is indeed Cuarón's masterpiece, and for such an accomplished filmmaker that is no small thing. From the gorgeous cinematography that demonstrates the difference between merely not shooting in color and mastering the naunces of black and white to each painstaking  piece of framing that makes each shot a painting while never detracting from the flow and the reality of the film, Roma is the very essence of filmmaking as a visual art from.  But equally impressive is the use of sound, as Cuarón' forgoes a musical score and we only hear recorded songs coming from their origin sources within the story. Each individual sound of the streets of Mexico City, the beaches at Veracruz, or the home in which Cleo cares for and influences the children who are not hers but rely on her for everything, immerses the audience member in Cleo's world.


Roma does contain some some harsh profanity, shocking violence portraying the The Corpus Christi Massacre (or El Halconazo) in Mexico City in July of 1971, as well as "graphic nudity" (which is Hollywood's way of referring to the male anatomy), and may not be for all viewers, but even the shocking nudity, which seems largely unmotivated at first, is there for a very specific reason and is part of  the director's thoughtful and uncompromising vision.

This is very likely the only major film set in Mexico aside from Coco in recent years that does not involve a drug cartel, and Cuarón's tells his story in a way that makes the setting really come to life and feel like a character in its own right, and yet certain character and story elements have a universal resonance. But it is a film about life in Mexico City, coming in a time when we tend to have so many preconceived notions about the nation.  It's not the kind of film that gets people coming out to the multiplexes in droves, and and as such the widespread release on Netflix may be a great boon in that viewers who hear critics singing its praises can so easily access it. That's the upside: the down is that having had the chance to see Roma in a special theatrical presentation, we definitely feel that it plays best in a darkened theater with the highest sound quality. It's a wonderfully immersive sensory experience, and some of that will definitely be lost in the wider digital release. But that fact remains that Netflix is offering a venue for this film to potentially reach a much wider audience than it would playing only in art houses. But if you do have the opportunity to catch the full cinematic experience, we strongly suggest that you make it a priority of your movie going season. This is easily one of the very best films of 2018, and deserved to be seen in the best possible presentation.