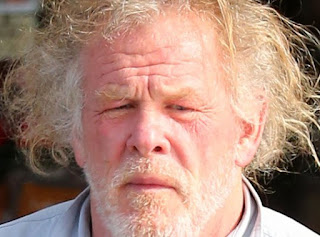 The Hollywood Reporter has broken the story that Julia Roberts favorite actor, Nick Nolte, has joined the cast of the upcoming Star Wars streaming series.

The series, which will air on the streaming service Disney+, will also star Pedro Pascal and Gina Carano (the female Nick Nolte). Like the other previously announced cast members, the exact details of Nolte’s character are being kept under wraps. Lucasfilm's official description of the series is as follows:

"After the stories of Jango and Boba Fett, another warrior emerges in the Star Wars universe. The Mandalorian is set after the fall of the Empire and before the emergence of the First Order. We follow the travails of a lone gunfighter in the outer reaches of the galaxy far from the authority of the New Republic."

Jon "Rio Durrant" Favreau wrote the series and is executive producing along with Kathleen Kennedy, Colin Wilson and Dave Filoni. Filoni will also direct episodes, as will with Taika Waititi, Bryce Dallas Howard, Rick Famuyiwa and Deborah Chow. Nolte has been nominated for thee Academy Awards and is was on the short list of actors considered for the role of Han Solo in the original Star Wars.
What are your thoughts on this news?
The Bearded Trio - The Site For Steven Spielberg, George Lucas, John Williams and a whole lot more.