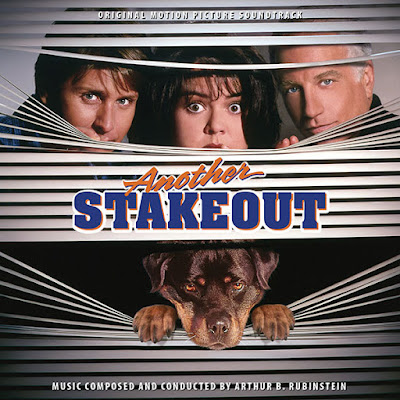 ANOTHER STAKEOUT
Music Composed and Conducted by ARTHUR B. RUBINSTEIN
INTRADA ISC 407

In honor of composer Arthur B. Rubinstein who passed away earlier this year, Intrada is proud to present his colorful, spirited score to the 1993 sequel, Another Stakeout starring Richard Dreyfuss, Emilio Estevez and Rosie O'Donnell. In the first film, Stakeout, Chris Lecce (Dreyfuss) and Bill Reimers (Estevez) pair as comically quarrelsome Seattle detectives who stake out the ex-girlfriend of an escaped con, only for Lecce to fall head-over-heels in love with the woman they are surveilling. Six years later, Another Stakeout heats up with a literal bang as hit man Tony Castellano (Miguel Ferrer) attempts to blow up Lu Delano (Cathy Moriarty), the star witness against a Mafia boss. When Delano subsequently vanishes, zealous A.D.A. Gina Garrett (O’Donnell) recruits Lecce and Reimers to stake out the lake district where Delano is believed to be hiding.

Rubinstein’s score for Another Stakeout is distinguished from its predecessor in several ways, one of which is scope. As a budget eighties actioner, the original movie had a synth-heavy score with a pronounced pop vibe. The sequel also employs synth and pop elements, but with a nearly ninety-member orchestra at the composer’s disposal. The difference is immediately apparent in the main title, with its spellbinding arpeggios and sumptuous dark strings. The film relies on its own catalogue of motifs. First is the suspenseful theme introduced in the main title. Second is a muscular action theme, related to the motif for the actual stakeout. Finally, there is a heartstring-tugging theme for Lecce and Maria that spotlights the colors of guitar and flute. Though not heard frequently—it appears about as often as Maria herself—this is one of Rubinstein’s loveliest melodies.

Rubinstein scored the opening portion in a serious vein, then fashioned his score to match the amiable dynamics of the two principal stars. The soundtrack for Another Stakeout plays as two distinct scores. Common thematic ideas and harmonic devices are shared in both styles of writing and the result is an unusually strong cohesiveness within a widely diverse hour of music. Intrada prepared this premiere release from the 2″ 24-track masters recorded over four days in late June 1993 by veteran John Richards at Todd-AO Studios with the composer conducting.