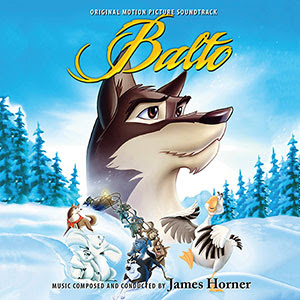 Intrada announces its latest release from the canon of James Horner – the 1995 Universal Pictures and Amblin Entertainment animated feature, Balto. Balto was one of three animated films Horner scored for Steven Spielberg's Amblimation, the prior two being An American Tail: Fievel Goes West and We're Back! A Dinosaur's Story. Just as Spielberg endowed his animated features with grand cinematic qualities, so too did Horner score them with a broad symphonic sweep, writing in large musical paragraphs to enhance the films’ scope. Here the composer weaves just one principal theme throughout his score — a theme that proves remarkably malleable. But Horner treats it to so many variations involving pitch, rhythm, color and harmony that it is only with careful listening that one becomes aware of how pervasive it is. Animated films represent a relatively small portion of James Horner’s film score output (he scored 8 such projects), but reveal a large portion of his generous heart. His music for Balto engages our minds with its craft and captivates our hearts with its artistry, performed by the composer-led London Symphony Orchestra who brings Horner’s work to vibrant life.

At the time of the film's release, MCA released an album of highlights. For this Intrada presentation of the entire score, including several alternates, Intrada was provided access to the complete two-track stereo scoring session mixes, made by Shawn Murphy, on DATs provided by Universal Pictures.

Balto was inspired by true events. The real-life Balto, a Siberian husky, led the final dog team (of several) that delivered desperately needed diphtheria serum through over 600 miles of brutal January weather to Nome, Alaska, in 1925. The dog’s heroics made headlines and inspired the annual Iditarod sled race.