Movie Review: "First Man" is a Deeply Personal Journey of the Heart and Soul 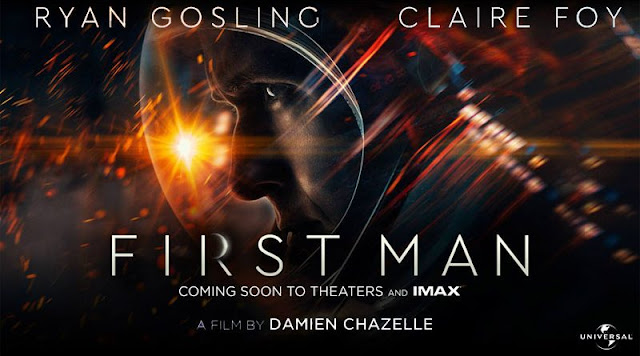 
It's a bit draw-dropping to think that 49 years after the Apollo 11 moon landing, there has never been a definitive dramatic film about that event. There have been documentaries like For All Mankind and In The Shadow of the Moon. There was a made for cable film called Apollo 11 in the '90s. And course Tom Hanks and Ron Howard gave us two extraordinary looks at the Apollo program with the masterpiece Apollo 13 and the excellent miniseries From The Earth To The Moon. But until now, there has been no one feature film that stood as Hollywood's defining word on the first landing on the moon. But now there is one, and it's well worth the wait.

Academy-Award winning director Damien Chazelle (La La Land) has proven himself again to be an extraordinary talent, crafting a film that is a tour de force of technical achievement and suspense in depicting a story that shouldn't have any suspense, as it depicts one of the most famous moments in the history of the world (one which has been definitively proven to have happened, no matter what poorly written and easily debunked rubbish you may have Googled.). But what's more surprising and affecting is that it's also a deeply moving, profound and spiritual film, exploring themes of life, death, grief, eternity and connection to the cosmos in ways that are breathtaking.

The film begins with Neil Armstrong (Ryan Gosling) working as a test pilot flying the experimental X-15. Armstrong and his wife Janet (Claire Foy) are experiencing a crisis, as their young daughter Karen has a brain tumor. When Karen tragically dies, Neil takes a new job to move on: he becomes an astronaut with NASA's Gemini program, preparing the way for the coming Apollo lunar missions. While the bulk of the film deals with Neil's experiences in Gemini and Apollo, Karen's short life and devastating death hang over the film, providing it with its thematic resonance and a great deal of emotion. Chazelle and screenwriter Josh Singer (Spotlight, The Post) have chosen to make a movie about Neil Armstrong rather than one about the first moon landing, and the personal focus makes it unlike any other film ever made about the space program, equally the spectacular achievements of The Right Stuff and Apollo 13 while being something entirely its own.

Gosling, an amazing actor who is on an almost ridiculous hot strea , gives one of the best performances of his career in a low key, understated manner that that perfectly captures the famously reserved astronaut. Foy is every bit his equal, making Janet a fully realized character that never feels reduced to just being "the wife",as is so often the case in historical films with male protagonists. The relationship between them is as compelling as the race to the moon, and every interaction, every look between them resonates as 100% emotionally genuine. The supporting cast is highlighted by the always excellent Jason Clarke as astronaut Ed White and Patrick Fugit as astronaut Elliott See. And Ant-Man's Corey Stoll steals his share of scenes as Buzz Aldrin.

It's entirely fitting that Steven Spielberg acted as an executive producer on First Man, as Damien Chazelle is the Spielberg of his generation, a thundering talent that has achieved genuine cinematic greatness so early in his career that it's impossible not to wonder if he's peaked before the age of 35. But if Chazelle grows as Spielberg did, his future is easily one of the most exciting prospects in the world of cinema. He's more than deserving of a second Best Director Oscar for his work here (though actually getting it at this age is unlikely.). He wisely avoids ever approaching his Apollo mission in a style similar to Ron Howard's iconic work, creating a film that stands entirely on its own without ever feeling like it's trying too hard to do so. Much has been made of the absence of a scene depicting the planting of the American flag on the moon, with everyone from a certain U.S. President to Buzz Aldrin himself weighing in before actually seeing the film. But anyone who does see it will understand that the choice has nothing to do with politics, and if they understand the nature of art they will accept it couldn't have been done any other way. Great historical films are not merely about re-staging the iconic moments, or even about the historical events themselves. Chazelle has crafted something deeper and richer than that, a film that is less about landing on the moon than it is about living and dying

To call First Man merely one of the best films of 2018 so far is to do it an injustice. This is a film for the ages, a sublime, intimate epic of the glory of the cosmos and the pain and triumph of the soul. It is not to be missed.