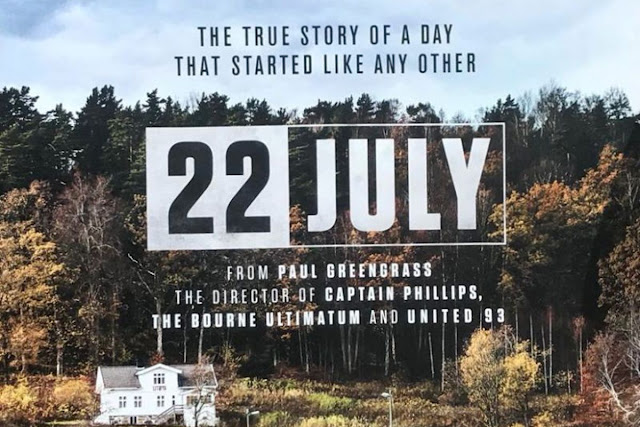 
The 2011 Norway attacks are referred to in Norway as 22 July, just as the September 11th World Trade Center attacks are shorthanded as 9/11 in the United States, and both dates are forever etched in a nation's consciousness. On 22 July, an Alt Right terrorist named Anders Behrin Breivik murdered 77 people, first setting off a car bomb in the government quarter of Olso, and then, less than two hours later, walking into a Workerss' Youth League (AUF) summer camp of the island of Utøya with an assault rifle. In his manifesto and statements to the police, Breivig made it clear that his goal was to stop the "forced integration" of Muslims and other immigration into society.

Prime Minister Jens Stoltenberg (Ola G. Furuseth) is horrified that Breivik was able to go undetected by the government while ordering components online to make his bomb, and even more so at the realization that this was able to happen because Norwegian government were only actively monitoring Muslims.

When he is not making Bourne movies, director Paul Greengrass has made something of a niche for himself making visceral, pulse pounding films about horrifying events in the recent past.
The question of whether films such as United 93 and 22 July are honoring the victims of these tragedies, or whether they merely milk the events for commercial drama is a complex one that is not easily answered. During the attack sequence, it's hard to not to imagine what Greengrass could do with a Sabdyhook movie, but it's also hard to believe any worthwhile purpose would be served by one any time in the near future. One thing that is certain, however, is that Greengrass isn't looking to make larger than life Hollywood epics, where flags ripple in the breeze in slow motion as a rousing musical score conveys fills our hearts with emotion at the indomitable spirit of real life superheroes. His raw cinéma vérité approach is meant to put us right there in the event (imagine the D-Day sequence from Saving Private Ryan at feature length and with even less less flourish.).


Unlike Captain Phillips, which had the strong benefit of following Tom Hanks as the title character throughout, 22 July doesn't really have a central character, and for some, that will make it hard to connect with as a narrative. But as the film progresses, it becomes clear that this is a strength rather than a weakness (all you need to do to answer the question why is to to think of Mark Wahlberg's laughable fictional hero in Patriot's Day, who could hop from one pivotal event to the next in less time than Jack Bauer).

We also realize slowly grow to regard young Viljar Hanssen (Jonas Strand Gravli) as a protagonist in this story as the film plays out, but Greengrass has boldly chosen not to make him jump out as such because he doesn't see himself that way. We watch this young man build from an ordinary (if ambititous) teen who is shot while protecting his younger brother to a very helpless and emotionally lost victim and finally into a genuine hero.

Jon Øigarden makes for a low key but compelling supporting lead as Geir Lippestad, the high profile attorney hand pick by Breivik to represent him. The relationship between Lippstad, a liberal member of the Labour Party who has no desire to defend Breivik, and the smug, narcissistic young terrorist (chillingly portrayed by Andsers Danielson Lie) makes for some of the most interesting (and the most disquieting) sequences in the film. Brievik not only sees himself as a soldier fighting to "Make Norway Great Again", but he is so intent on approval and admiration for his actions that he often deludes himself into believing he's getting it from Lippestad. In one of the most devastating moments of the film, Lippestad visits Breivik's mother to plead with her to testify on behalf of her son. She refuses, unable to handle the thought that everyone will know who she is. But as Lippestad leaves, she blurts out "But he's right, you know. About the direction the country is going in."

Greengrass makes use of his signature "Bournographic" style, complete with shaky cam and frequent jump cutting, but between the shrewd choice to hold back on it until the attack starts and the 16:9 television aspect ratio (in contrast to his usual wide screen), it is a lot less likely to cause headaches, motion sickness or confusion in this film. The director seems to have stopped doing so much experimenting and settled into trusting his instincts letting the camera serve the story.

The most sobering aspect of the story, by far, in the realization that this is a huge part of the future of terrorism in Europe and especially in the United States, and the fantastic next door who we may be friends with on social media and who looks just like us may be a far more ominous threat (and a more difficult enemy to fight) than any outside force. Greengrass never hits you over the head with speeches to that effect, instead trusting that the characters and events speak for themselves. This is no political propaganda film, but it if you are paying attention and taking everything in, you may not find it easy to sleep after seeing 22 July. And while the good part of it being on Netflix is that potentially brings the film and its timely message to a wide audience, many of them will likely give in to the the temptation to click to something a little less real that they can escape into.