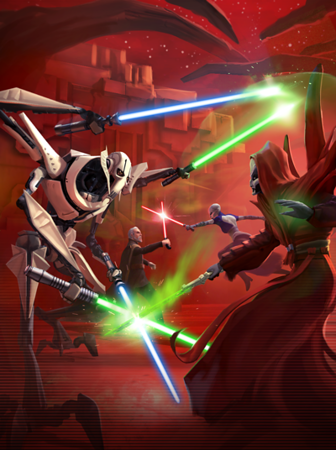 Halloween-inspired content updates are coming to Star Wars Games.  Fans can celebrate the season spooky haunts with Star Wars Battlefront II and Star Wars: Galaxy of Heroes with a hint of spookiness.

• Star Wars Battlefront II: October 26 - 31 – A Halloween-inspired night-mode is coming to select maps, including Mos Eisley, Endor, Kashyyyk and Naboo. Players will also find the cloning facility on Kamino haunted by a furious ocean storm. To top it off, the Death Star II and Jabba’s Palace will re-appear and all of this will occur during a Double XP weekend.

• Star Wars: Galaxy of Heroes: October 30 – 31 – The Defense of Dathomir event will commence as General Grievous, Count Dooku and the Separatist Army invade the planet. In this limited-time, 2-tier event, players can gather a force of Nightsisters and defend Darthomir from peril for special rewards: shards for Mother Talzin will be rewarded to victors in tier 1 and 2-4 coveted Zeta Ability Materials are rewarded to tier 2 winners.