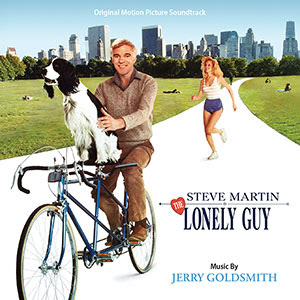 For the 1984 Universal Studios film The Lonely Guy, composer Jerry Goldsmith composed a lighthearted score, dominated by a sweet love theme. The theme is first featured over the film's opening credits in the form of a vocal ("Love Comes Without Warning) performed by America — a melody that begins with a melancholy, seven-note phrase and variations before turning into a rhythmic, pop-flavored song. Goldsmith wrote a number of treatments of this theme for keyboard and solo piano, giving the score a unified feel that centers around Steve Martin’s character. As is evident from the numerous alternates on this CD, the film was a challenging, perhaps even grueling assignment, with the composer forced to record numerous approaches to several cues, often making changes and revisions on the recording stage during sessions.

Previously released only on an MCA LP back at the time of the film's release, it was a mini-LP, featuring four vocals and two of Goldsmith's score cuts. With the generous cooperation of Universal Music Group and Universal Studios, Intrada accessed all of the stereo music elements from 1/4″, 1/2″ and 2″ 24-track elements to put a comprehensive album together featuring Goldsmith's charming, wistful, and playful score. It's infectious and good-natured, and perhaps the last Jerry Goldsmith LP to find its way onto CD. 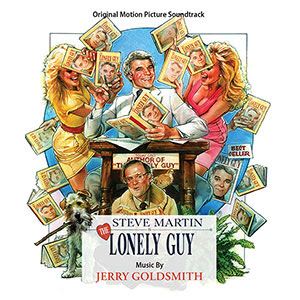 The Lonely Guy was based on The Lonely Guy’s Book of Life, a non-fiction book by Bruce Jay Friedman. The late Neil Simon spun off a screenplay loosely based on Friedman’s ideas, following lonely guy Larry Hubbard (Steve Martin) in New York City, where “Lonely Guy” is an established class of persons and where Hubbard commiserates with other Lonely Guys such as milquetoast Warren Evans (Charles Grodin). He also endures excruciating bad fortune with women such as his ex-girlfriend Danielle (Robin Douglas) and Iris (Judith Ivey), ex-wife of another Lonely Guy—who apparently hasn’t had sex despite six previous marriages.