Movie Review: "The House with a Clock in its Walls" is Pure Amblin Magic 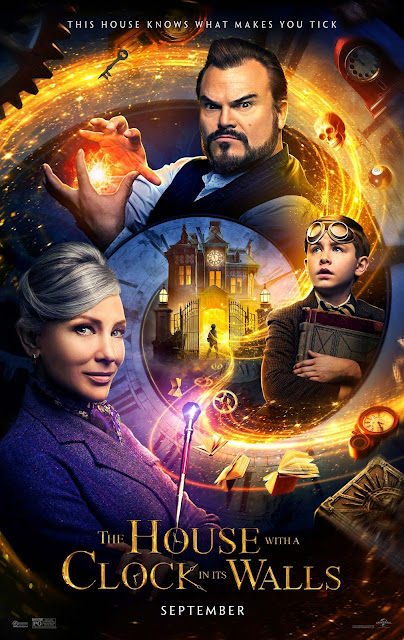 It was inevitable that one day Eli Roth would make a kid's movie, and when it .  . . wait? Eli Roth? A kids movie? Eli "Hostel" Roth? The same guy who gave us Death Wish just a few months ago? How does that work?

The answer is, surprisingly well.

In 1955, ten-year-old Lewis Barnavelt (Owen Vaccaro) goes to New Zebedee, Michigan to live with his uncle Jonathan in a creaky old house which has a mysterious ticking heart. Recently orphaned, Lewis (Jack Black) only wants to have a normal childhood but soon discovers he's in line for anything but that. Uncle Jonathan is in fact a mediocre but well-intentioned warlock, while his next-door neighbor and good friend Florence Zimmerman (Cate Blanchett) is a far more powerful good witch.

The house that Lewis has just moved into was previously owned by Isaac and Selena Izard. Before dying, this sinister couple had constructed a powerful clock that is hidden somewhere within the walls of the house where it ticks eternally. Jonathan has filled the house with clocks to try to drown out the noise to prevent him from going mad (because the best way to mask the noise of something is to multiply it by the dozens.). But the sleepy facade of Lewis' new town jolts to life with a secret world of warlocks and witches when Lewis makes a dreadful mistake while trying  to make a new friend and impress the popular Tarby Corrigan (Sunny Suljic from The Killing of a Sacred Deer).


If there is one thing Eli Roth is known for (aside from grotesque, sadistic violence) it is a sense of atmosphere, and he brings enough to spare to this film. He also brings a boundless enthusiasm and commitment to storytelling, as well as a gift for bringing grounded performances out of his actors (Black is a great talent, but could have easily been overly mannered in the role with the wrong hand guiding him.). It's actually a perfect match of director to material, and without the ability to rely on shocking excess, Roth channels his energies into worthier goals.

Young Owen Vaccaro (known for the Daddy's Home films) couldn't be more endearing in the lead role if he tried, and the best part is that he never feels like he is trying too hard. This absolutely should be looked at as a star making performance. Black is wonderful as Uncle Jonathan, and the family movie niche he's settling into really seems to be working for him. But we admit that we could see this movie over and over again just to watch the spirited and utterly lovable performance by Blanchett, an amazing actress who has every right and qualification to be an utterly pretentious snob but has been on something of a hot streak of wonderfully fun performances in lighter fair.

As with most films of this type, there a few pandering moments (the litterbox joke with the Topiary Lion doesn't need to be repeated that many times), and a couple of computer generated effects that don't quite work (though the vast majority of them do.). But there is so much that does work that it's easy to brush those concerns aside. This is a Halloween delight for all ages, and hopefully it's the beginning of Roth branching out into exciting new directions.

If you get a chance to see it in IMAX, there is the added treat of Michael Jackson and John Landis' original music video masterpiece, Thriller, presented in 3D (if you don't see the appeal of the ultimate homage to campy horror in 3D, you really don't get the material.).