Spielberg on The Post - 'Strong Desire To Tell This Story Now' 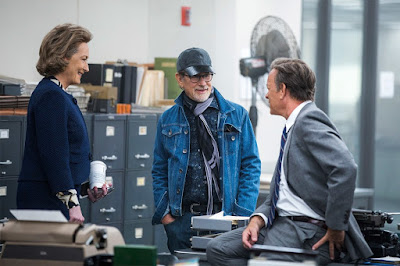 A strong desire to tell the true story of The Post now was what made Steven Spielberg shift his attention away from Ready Player One, all be it for a short time.  "This couldn't wait" explained Spielberg after the first screening last Sunday.

Spielberg revealed that it was only nine months ago he was handed the script and here we are today with the movie hitting the big screen.  Vanity Fair tell us:

“What could have inspired you to make a film about journalists standing up to an adversarial presidency?” panel moderator Mark Harris dryly asked. Spielberg then wowed the insider crowd by explaining that producer Amy Pascal handed him 31-year-old screenwriter Liz Hannah’s spec script for The Post a mere nine months ago.

The director was actually in the middle of post-production on next year’s special-effects-heavy Ready Player One when he ducked away to quickly shoot The Post. The motivation for his unorthodox move—and his swiftness—was the desire to “tell this story today.”

Jokes aside, this movie really does move—though certainly this is of a piece with Lincoln and Bridge of Spies Spielberg, rather than Jurassic Park Spielberg. “The movie is about the characters,” the director said. “This is a heroic story.”