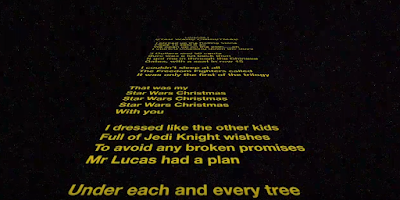 There's nothing like a good Christmas song to put you in the mood for the holiday cheer and the good folks over at Matinee Music contacted The Bearded Trio to make us aware of their brand new musical offering.  It tells the story of Kenner's Early Bird Certificate Package which thousands of kids received for Christmas back in 1977.  Essentially an empty box and a promise.  Here's what Matinee has to say about the new song and you can listen to it below:

In 1977, George Lucas released his first Star Wars film, and well, the rest is history. However, some of the more interesting details of the Star Wars saga have weathered away like the sands of Tatooine.

Did you know that for Christmas 1977, due to the fact no toys had yet been manufactured, the Star Wars enterprise devised a way to sell parents an 'empty box' with an IOU mail-in rebate coupon? They sold over 500,000 of these empty boxes, and the toys would be mailed at a later date.

Did you know that in 1978, wanting to capitalize on the Star Wars hysteria but with no new movie to promote, studio bosses created a Star Wars Holiday Special, starring the cast, Chewbacca's family, and Jefferson Starship? It aired once before getting pulled from the airwaves. It is truly painful to watch... and had it not been for Youtube, we may never have had the opportunity. George Lucas reportedly wanted to buy each and every master copy there was and destroy them.

With these anecdotes in mind, we present to you our new holiday classic, Star Wars Christmas. Enjoy!

We dove into the deep recesses of the Star Wars history books… to tell the tale of the first Star Wars Christmas back in 1977, and how instead of toys, children received an empty box with an IOU coupon under the tree. Of course we also had to include the fabled Holiday Special in 1978, celebrating Life Day.

This song was a lot of fun to make, and we just want people around the world to hear it in anticipation of the new film. We hope it brings some laughs, some smiles, and some memories back for the older fans!

Song is also available on Spotify and iTunes:  http://smarturl.it/starwarschristmas