Movie Review: "The Shape of Water" Is a Gorgeous and Touching Love Story 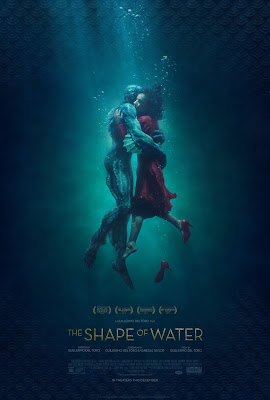 
Director Guillermo Del Toro has is one of the most singualr artistic voices in film, with an ability to make art films that can crossover into the mainstream (Pan's Labyrinth) and mainstream popcorn films that have a certain appeal to the art house crowd (Hellboy, Crimson Peak, and even the gloriously silly Pacific Rim.). His approach to filmmaking can be summed up in one word: love. No one approaches their craft with more genuinely, painstaking joy and a more loving hand than this quirky artist, and his latest film is a testimony of the power of love.

Elisa Esposito (Hawkins) is a mousy, awkward woman who works as a night janitor at the Occam Aerospace Research Center in Baltimore, Maryland in the early 1960's. Elisa is mute due to an incident that happened in her childhood, and her only friends are her roommate,Giles (Jenkins) a closeted gay man, and Zelda Fuller (Spencer) a spunky co-worker who looks out for her. One day, things are shaken up a bit when the facility receives a new arrival, discovered by the cruel and abusive Colonel Richard Strickland (Shannon) in the rivers of South America. After Elisa has a brief encounter with "The Asset," which she discovers is an amphibious humanoid creature, she begins sneaking into the enclosure. Elisa spends time with the Asset, feeding him hard-boiled eggs and sharing music with him through records played on a portable turntable. Over time, the two develop a bond.

Hawkins gives a luminous performance in the lead role, making you care deeply for Elisa almost instantly. If the movie was required to rest solely on her shoulders, it would probably still succeed, but she surrounded by magnificent co-stars as well. Jenkins gives his best film performance in some time as Giles, and it's a wonderfully sensitive turn that doesn't rely on any affectations. If you want stellar supporting performances, Ocatvia Spencer and Michael Stuhlbarg are two of the top names you go to, and both give 100 percent to their respective roles (Stuhlbarg plays a Russian scientist who has infiltrated the facility to study the creature.). One performance that is not getting nearly enough attention is the great Doug Jones as the Amphibian Man. Jones is, of course, a Del Toro regular, having appeared as the title character in Pan's Labyrinth, as Abraham Sapien in both Hellboy films and as the Ghost of Edith's Mother in Crimson Peak (and can be seen on television as Lt. Saru on Star Trek: Discovery.). This gifted actor is a master at creating vivid characters under prosthesis and heavy make-up, and to say that the movie wouldn't work without him is an understatement. We know from personal experience and from those of many colleagues we've spoken to that Jones also happens to be one of the most genuinely warm and friendly people in the business, and the fact that he's the kind of guy that embodies the positive qualities that we attribute to the term "human" is a big part of why he is able to bring non-human characters to life with such soulfulness. Michael Shannon, who made such a huge impression in Revolutionary Road, started out with such a bang  that it has been quite a tough act to follow, makes an excellent villain as Strickland, credibly playing the man as a devoted (if demented) government operative who thinks he's the good guy here merely by virtue of being Richard Strickland, and whether anyone else is good or bad simply isn't his problem.

But as great as the cast is, this is a director's film all the way, and Del Toro the artist paints with a steady hand and a palate of colors you didn't even know existed. The word "visionary" is one we don't like to throw around often, as it an awfully strong compliment and has become the all purpose term Hollywood uses to sell any filmmaker who has a fan base but no major awards, but Del Toro is worthy of the designation. He has a way of making all of his films feel so personal that watching one is like taking a glimpse into his heart, mind and soul, which is why his collaboration with composer Alexandre Desplat is a match made in heaven.

The film does feature some disturbing images and gore, as well as some sexuality and quite a bit more female nudity than you might expect, so despite the Edward Scissorhands vibe, it's advisable to leave at least the younger  kids at home. But it's a moving tale that is wholly deserving of all of the awards momentum it has been getting, and easily one of the year's best.