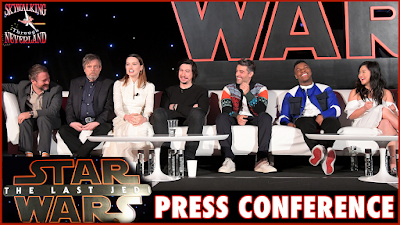 The good folks over at Skywalking Through Neverland were lucky enough to be at the global press conference for Star Wars: The Last Jedi on Sunday which took place in downtown Los Angeles, CA.  Thankfully they recorded the event and you can listen to the conference below.

Here's what they have to say about the show:

STAR WARS: THE LAST JEDI Global Press Conference took place on Sunday, December 3rd in Downtown Los Angeles, CA, and we were Skywalking all the way through, grabbing the best audio straight from their mixer. It was an amazing event, with the entire main cast in attendance. Here is the illustrious list:
You may hear Richard Woloski ask a great question, as well as James Burns (JediNews). Please listen to our crossover episode with JediNews where we break down our favorite moments from the Press Conference, and explain all the other booths and events around the conference itself. You can listen here: