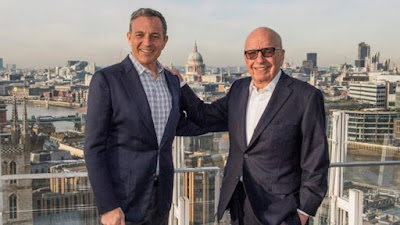 How big can they go?  Disney that is.  Marvel, Lucasfilm, Pixar and now Fox.  Disney have sealed the deal and bought 21st Century Fox for a bargain price of $52.4bn, that's around £39bn.

What do they get for that?  39% stake in Sky and the 20th Century Fox film studio.  Fox News and Sports will form a brand new company.

Disney chief executive Bob Iger said that Disney was "incredibly excited" about the acquisition, and that it was an "opportunity to expand iconic franchises", including Avatar and Star Wars.

"May the Force be with us all," Mr Iger said.

What will this mean for us movie fans?  Well expect Disney to be Iger...I mean eager to start getting their moneys worth.  Alien franchise, Avatar, Deadpool will all now come under the control of Disney and will we get a decent Fantastic 4 movie at last?  Oh, lets not forget The Simpsons.  Will Disney embrace Springfield or call time?