comparethemarket.com teams up with Lucasfilm and Disney on Star Wars: The Last Jedi campaign 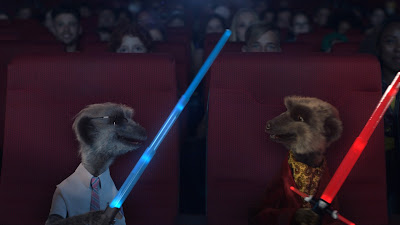 Ahead of the hotly anticipated Star Wars: The Last Jedi, comparethemarket.com has collaborated with Lucasfilm and Disney on a new campaign which will see the meerkats immerse themselves in the world of Star Wars.

A brand-new 30” ad will air on TV from the 1st December 2017, inspired by the longstanding Star Wars franchise and the memories many people will have of seeing the films throughout their lives. 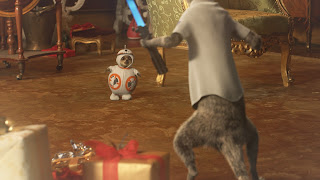 The advert opens on the present day with a shot of Sergei looking through his trunk of treasures in the attic. He finds and eagerly pulls out his toy lightsaber from years gone by. Dusting off his discovery, audiences are then catapulted back to Sergei’s childhood where he can be seen playing around the garden with his lightsaber and father in view. The ad then moves on to a second memory of Sergei giggling and play-fighting outdoors.

The scene changes to a festive living room, with a fire crackling and a Christmas tree in the background. Popular baby meerpup Oleg is seen dressed in a cute BB-8 onesie as he playfully tackles Sergei.

The ad finishes as Sergei’s memories are interrupted and he is seen back in the present day with Aleksandr calling for him to hurry up or else they’ll miss the film. Aleksandr and Sergei are then seen back together at the cinema, lightsabers in hand, ready to watch Star Wars: The Last Jedi.

The new advert is supported by a 360-marketing campaign. The TVC, by VCCP Blue, was directed by Darren Walsh and produced by Steven Riley and Patrick Duguid at Passion Pictures. The ad, also supported by media agency MEC, will be promoted via TV, radio, OOH, in-cinema and social. Further details on a social media activation will be released from the 15th December 2017. 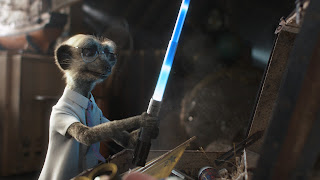 Mark Vile, Chief Marketing Officer at comparethemarket.com, said: “The Star Wars franchise evokes nostalgic memories for many people, with a trip to the cinema often a highly anticipated family event. After a hugely successful partnership with Disney for Star Wars: The Force Awakens, the biggest movie of all time in the UK, we’re delighted to be working on the next instalment of this iconic film franchise. We’ve got some exciting activations in the pipeline that our customers are going to love and be able to get actively involved in, so would advise everyone to keep a look out, as more is yet to be revealed.”

Existing and new customers of comparethemarket.com have the exclusive opportunity to enjoy the new Star Wars: The Last Jedi film with their 2-for-1 MEERKAT MOVIES cinema tickets either on a Tuesday or Wednesday.

Since launching MEERKAT MOVIES over two years ago, over eight and a half million people have redeemed a code with comparethemarket.com, potentially saving the UK over £56m by giving members the chance to enjoy two for one cinema tickets every week for a year.