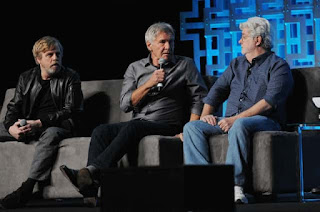 "Beautifully made" is the quote from George Lucas on Star Wars: The Last Jedi.  According to Hollywood Reporter the Star Wars creator was "highly impressed."  Hmm!  Is it me or is that a compliment to the movie makers and the way it looks and not the actual story?  We all know that Lucas had his own idea for episodes 7,8 and 9.

The Star Wars creator recently screened the highly anticipated upcoming installment and thought it was "beautifully made," Connie Wethington, a rep for Lucas, told Heat Vision.

"And in speaking with director Rian Johnson after viewing was complimentary," she added.