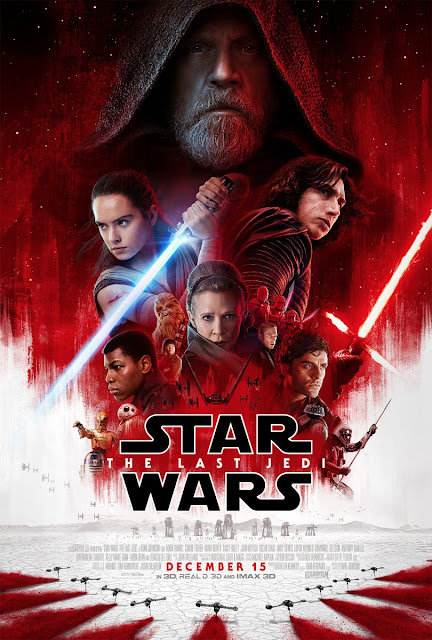 Star Wars fans are gearing up for the opening of the 'Last Jedi', taking to social media to feed their excitement, with 1.5 million mentions of the 'Last Jedi' over the last week and more than 5.3 million over the last 30 days worldwide, according to international social media analytics firm Talkwalker. In contrast, 'Jumanji', the other big Christmas release, has scored 173,000 mentions in the past 30 days and 74,000 in the past week. 'The Greatest Showman' received 144.500 mentions in the past 30 days and 65.500 in the past week.  Mentions of 'Last Jedi' peaked on December 10th, with buzz around the premiere generating excitement across social media. This post from Chewbacca actor Peter Mayhew was shared over 2000 times https://twitter.com/TheWookieeRoars/status/939938627034931200 December 2 was another peak with more than 158,000 social posts.  This Instagram video on Dec. 2 marked two weeks until premiere date with more than 380,000 views.  https://www.instagram.com/p/BcKhJzqBfoq/ The third recent peak came on December 6 as the premiere date continues to draw close with nearly 160,000 social posts, thanks in part to a Red Carpet event in Tokyo, according to Talkwalker. https://www.instagram.com/p/BcX0NZOFTza/ This Tweet from Fall Out Boy’s Pete Wentz, who is apparently a Star Wars fanboy, attracted more than 10,000 reactions and captured many fans’ feelings about the movie; https://twitter.com/petewentz/status/938481754255577088 Director Rian Johnson Tweeted this plea to his fans, with more than 50,000 reactions;  https://twitter.com/rianjohnson/status/928756341908430848 Over the past week, Rey was the most discussed character (44k mentions) followed by Luke Skywalker (with 43.7k mentions).  Main villain Kylo Ren has had 27.3k mentions just behind Darth Vader (31k mentions) and Princess Leia (the late Carrie Fisher) who rounds out the top 5 with 23.8k mentions. Top tweets are pretty focused on Mark Hamill who is quite active on Twitter. This Tweet totalled more than 100,000 mentions.  https://twitter.com/HamillHimself/status/929782598913507328