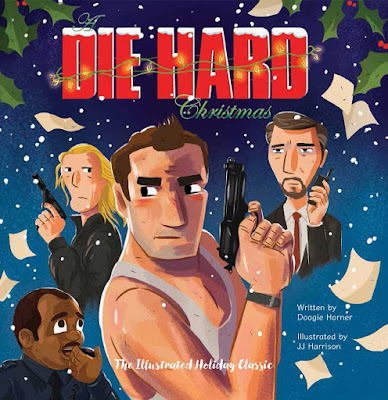 Our seventh idea for a holiday gift is for those who to celebrate Christmas with a bang. I still vividly remember the first time I ever saw Die Hard:

Picture it: West Valley City, Utah, the summer of 1989. My Mom and sisters were away at Girl's Camp, and my three brothers and I had permission to have a guy's movie night and rent some movies they wouldn't have any interest in seeing and that our Mom would just as soon disavow knowledge of us watching. We had already planned on Aliens and  Lethal Weapon, but my twin brother Paul chimed in at the last minute with seven of the most important words ever spoken by a human being: 'I'd kinda like to see Die Hard." 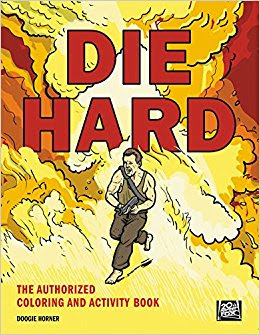 John McTiernan's classic was easily the hit of the mini film festival, and for me, like many, it has become an indelible part of the holiday season. Last year Paul bought me Die Hard: the Authorized Coloring and Activity Book by Doogie Horner, and it made me the envy of all of my weirder friends. Horner's detailed skillful and remarkably detailed drawings, combined with his sense of humor, made it my favorite gift. 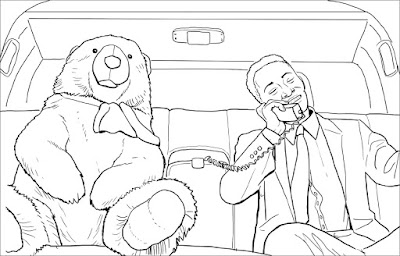 This year, Horner followed it up with A Die Hard Christmas: The Illustrated Holiday Classic, with illustrations by JJ Harrison. The book is written in the style of Clement C. Moore's "A Visit From St. Nicholas." 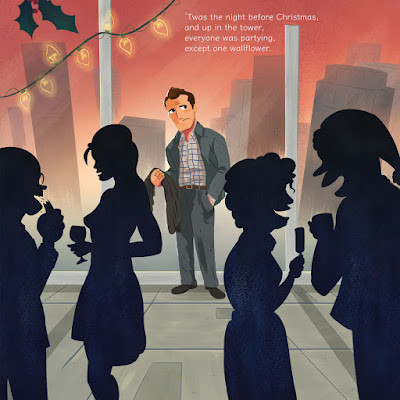 I had a chance to chat with Doogie Horner (who is also quite a gifted stand up comedian) about these books.

Let's start with beginning: your first experience with Die Hard. I could tell you all all of the details of my first viewing of that movie, and I have to believe that you remember your first viewing in that kind of detail. You never forget your first time. Can you share any memories?
- Ha, well I hate to disappoint you, but I don't remember the first time I watched Die Hard. I don't even remember the fifth or sixth time or whatever. I've never seen it on the big screen, either. I assume the first time I saw it I was around ten, and it was on TNT or something, edited for television, "Yippee ki yay monkey farmer," and all that.

Die Hard has become an increasingly big part of my personal observance of the Christmas holiday. My Christmas tree and decorations are all based the theme of "Alternative Christmas Movies (Gremlins, Lethal Weapon, Batman Returns, Rocky IV, Kiss Kiss Bang Bang, etc) and all of that got started because one year I put John McClane at the top of my tree, and I just wanted to incorporate more Die Hard into my decorations. So here I am thinking I've kind of cornered the market on this obsessive weirdness, and then last Christmas my twin gave me the Die Hard Coloring Book by Doogie Horner and I kind of flipped. Tell me a little about what prompted you to do the coloring book, and how you got Fox on board with it.
- Harper Collins called and asked me if I had any coloring book ideas. The coloring book craze seemed to be motivated somewhat by nostalgia, so I suggested doing coloring book versions of 80s movies. I gave them a list of suggested films and Die Hard was one of them.
I didn't get Fox on board with it, the publisher did. And it's easy to get them on board, I think, you just have to give them money.

Has anyone ever pointed out that you left out the silencer on Karl's gun in "Boom! Two points" bit? Does that ever keep you up at night?


- No, you're the first person who has noticed. I feel terrible.

So, the coloring book was success, and now we have A Die Hard Christmas: The Illustrated Holiday Classic. The minute I found out about the existence of the book, I knew it had to be you that wrote it. What made you want to do another book on the subject?

- I didn't, necessarily, but another publisher asked if I wanted to do it. I was happy to, of course. I love Die Hard.

The illustrations by JJ Harrison are just wonderful, but obviously you're quite a remarkable artist yourself. Was the choice to go with a different illustrator a stylistic choice, or were there any other factors?

- The publisher only asked me to write it, and I was pretty busy at the time with other projects, so I didn't mind just doing the writing. I thought writing the book wouldn't take too long, however, I was wrong. I wanted to match the poetry style of the original poem A Visit From Saint Nick and of course I'm not a poet, so I did a lot of research.

I have your stand up album, it's very funny stuff. Do you consider yourself a comedian first and foremost? And how has being the Die Hard guy effected that? Has there been any cross over in fans base?

- Well first and foremost, of course, I'm a patriot. No, just kidding. I don't necessarily consider myself an anything first and foremost. I do lots of different things and enjoy them all. I think it's dangerous to wrap your identity up in your art, because then if your art is shit then that makes you shit. But if you're just a guy and you make something that sucks, that's different, you don't suck. There has indeed been some crossover between the Die Hard book and my standup, I've had book fans come to shows. Also I'm on Doug Loves Movies sometimes and so of course there's crossover between those movie fans and Die Hard book fans. Movies, comedy, it's all there.

Have you ever gotten to meet anyone involved in the film, and if so, how do they feel about this stuff? I think of the look on Danny Glover's face when I told him my brothers and I went through a phase of watching Silverado every day (he actually said "you crazy, man"), and I have to wonder if any of these people think you're a little, shall we say, "unique."

- Bruce Willis and I were roommates for a couple years, but he was going through a tough period professionally, so I never asked him about Die Hard. I thought that reflecting on his glory days might depress him.