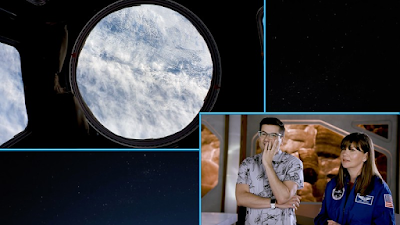 Lucasfilm and Disney today released a new episode Science and Star Wars on the science of space travel. In this week’s video, NASA astronaut Jack Fischer welcomes viewers via videostream from the International Space Station to give a tour of the largest structure humans have ever put into space, including the U.S. laboratory where engineers are studying the latest breakthroughs in space science.

Spaceships, star fighters, space stations: you can’t have Star Wars without them. But will we ever live in space?  In this episode, host Anthony Carboni explores:

Vasimir plasma engines, which could one day propel ships ten times as fast as modern chemical engines do today.
Quantum computing, or solving optimization problems in space travel, such as how satellites are using route-finding to scout the shortest path between two locations.
Treadmills in space, which are mounted on walls with harnesses to simulate gravity, allowing astronauts the resistance needed to continue to grow bones and muscles in space.

Over the course of the series, Science and Star Wars explores science fantasy, science fact, and the gray area in between, every Tuesday on the official Star Wars Facebook page. Please consider sharing this video with your readers.


About Science and Star Wars
Science and Star Wars is a new digital series from Disney and Lucasfilm that explores the science of the Star Wars universe, just how close real-world scientists are coming to emulate the technology, and the role of the franchise in inspiring some of science’s greatest innovations.