Movie Review: "Three Billboards" Is A Hilarious and Agonizing Masterpiece 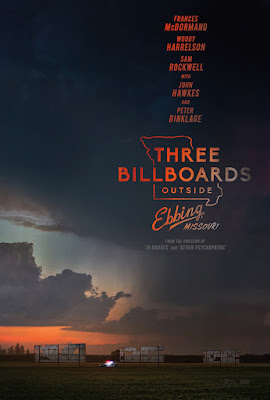 
Sometimes the best part of being critic is getting to see a great film before too much hype has been built up about it, and the worst part is when you get told you ruined a movie for someone by being a big part of that hype. There's there is no doubt that Three Billboards Outside Ebbing, Missouri falls into the first category, and we're halfheartedly apologizing in advance if it falls into the second, and the reason the apology is halfhearted is that the very best part of a critic's job is the chance to champion a truly great film that deserves to be seen.

Mildred Hayes (Frances McDormand) is a single divorced mother still grieving and feeling immense guilt over the rape and violent murder of her teenaged daughter, Angela, seven months prior to when our story begins. Infuriated with the police over the lack of progress in the investigation, she rents three abandoned billboards outside her hometown, which in sequence read: “Raped while dying,” “And still no arrests,”  and finally “How come, Chief Willoughby?”

The reaction to these billboards in the town is immediate and harsh, as Willoughby (Harrelson) is a beloved figure, respected by all. Everyone from Mildred's slimy ex-husband (Hawkes) to total strangers let her know how they feel, and the local Priest puts it plainly: "Everyone is with you on Angela. Nobody's with you on this."

The Chief himself is kinder and more patient to Mildred than most of his officers, especially Dixon (Rockwell), a blustering redneck buffoon who lives with his mother and has a record tarnished by accusations of brutality against black people. One of the only people in town who seems to be on Mildred's  ide is James (Peter Dinklage), a little person who gets a lot of harassment himself and harbors a crush on her. Even her son Robbie (Hedges, and Oscar nominee for Manchester By The Sea) express his anger at her the giant reminder of the awful details of what happened to his sister.

Writer'Director Martin McDonagh (In Bruges) has crafted a taught and wickedly funny dark comedy/drama that will have you feeling a sharp pain in your side as you laugh and one in your heart as the anguish and pain of life's most unwelcome realities cut unexpectedly deep. The moments of overwhelming regret are especially powerful as McDonagh's script demonstrates the various ways in which we hurt each other and the disturbing truth that emotional wounds can be far harder to heal than physical ones. At the same time, it portrays that families that express anger, bitterness and selfishness more often than love will often feel that love with an overwhelming and immeasurable ferocity when put to the test. The narrative manages to stand in judgement  of all of its characters and none of them at the same time, and McDonagh takes the story in some very unexpected places without ever getting smug about it.

McCormand establishes herself as very strong contender for a second Best Actress Oscar with her starkly honest portrayal of Mildred. Her ability to bring humanity to a character is surpassed by no one, and she has a singular presence. Harrleson, currently on perhaps the hottest streak of his illustrious career, is terrific as the Chief, but he's given the "Second Best Supporting Actor" role here, as Rockwell gives his most noteworthy performance since Moon. It's quite frankly difficult to imagine this film working with any other actor in the role of Dixon, who is a tough balancing act that defies traditional character conventions. Hedges, Hawkes and Dinklage add able support, as do Caleb Landry Jones (X-Men: First Class, Get Out) and Samara Weaving (The Babysitter) and Željko Ivanek (24, Black Hawk Down, In Bruges) in a surprisingly funny supporting role. It's an all around perfect ensemble that beautifully compliments each other. Carter Burwell's quiet, introspective score is nothing short of perfection.

One bit of warning that we include because it's an issue that is sensitive to us because of a dear friend: the film makes repeated use of the word "midget"as a nasty and insensitive slur, though it is meant to show ignorance in the same way that the N word is often used in film. We realize that many people don't see the word as a slur, but any word to describe a person that is most often used in real life as a punchline is a slur.

Three Billboards may not be for all taste, and is certainly depressing at times, but it's a daring and smart piece of filmmaking that goes beyond mere awards potential. This one has legs to be remembered for years to come and will show up in countless film classes, and mark our words: the ending, especially the final lines of dialogue, will become legendary to true cinema fans, and the movie will achieve a well earned classic status.