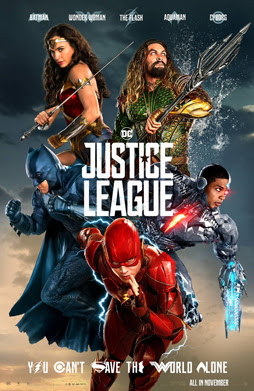 
Any time we review a DC superhero film, we feel the need to establish a bit of context: Like most critics and audiences, we've far preferred Marvel's cinematic offerings to date to DC's, with the excellent Wonder Woman being a big exception. But if forced to classify ourselves as Marvel or DC guys, we'd have to go with DC. Those are the characters we most grew up on, we've read more of their comic books, and we were introduced to the concept of superhero teams through Super Friends, which in our childhood social circle of the time was the cartoon everyone built their Saturday around. In essence we've been waiting for a Justice League (or Super Friends) movie our whole lives, where as (despite great fondness for some of the individual characters), we'd actually never heard of The Avengers until the straight-to-video animated films started coming out in the late 2000s. It's also worth noting that we're not dead set on a narrow tonal idea of how these characters should be portrayed. We're as fond of Adam West's Batman as we are of Christian Bale's, and have found something to love in every version of Superman from George Reeves to Tyler Hoechlin  The point of all of this is that we went into Justice League wanting with all our hearts to like it. Even love it. But at this same time, very aware of the fact that we thought Man of Steel was flawed, and that Batman v. Superman and Suicide Squad missed the mark almost completely.

The other point that we have to make clear going into this review is that we were shocked and saddened to hear of the loss suffered by Zack Snyder, and frankly, yes, we may pull our punches a bit when it comes to his work and signature style out of respect for him and the horrible circumstances that caused him to leave the production. Whatever else you may say, this is a director who throws himself into his work with gusto and passion, from Watchmen to Justice League has been driven by a love of DC Comics, and who stepped back and didn't take any of the credit for Wonder Woman despite a clear visual influence and guiding hand (and indeed, director Patty Jenkins more than deserved the lion's share of the praise, but the film was still a success for Snyder the executive producer and show runner.).

All right, so what did we think? We loved it. No, we LOVED it. Which is not to say the film is perfect. The story is quite muddled in places and the villain is weak. (think weak like Christopher Ecclestion's character in Thor: The Dark World, not like Jesse Eisenberg's nonsensically motivated and extremely irritating Lex Luthor in Batman v. Superman.). Because of this, the sense of gravity is a bit lacking, but the setup is really just an excuse for fun, and our heroes are so perfectly realized that it's hard to care. Every mistake they made with the portrayal of these characters in the previous films is corrected, and they're engaging, entertaining, complicated, and funny, like The Avengers, though they should be judged as their own characters and not as direct counterparts (Affleck is no Robert Downey, Jr., but he's playing Bruce Wayne, not Tony Stark.). For people who love these characters like we do, it's an absolute joy to behold. The fact that is owes an undying amount to Marvel and what they've done with the MCU is a given, but by the same token, the MCU wouldn't exist without DC films paving the way. There's not reason you can't have fun with both, so chill out.

Much has been made of the mix of Zack Snyder and Joss Whedon behind the camera, and just how much influence Whedon had. While reports are that only about 23.5 minutes of the film is Whedon's reshoots, his influence amounts to much more, from the overall tone to the inspired choice of Danny Elfman as composer, which allows for a fun, thrilling and emotional score that hits just the right level of referencing the classic themes of these legendary heroes without overdoing it. Whedon has definitely brought his trademark sense of humor (no need for fans to wring their hands about the infamous lack of humor in DC films ever again) and character development to the film. There is definitely a feeling that the film that has been heavily retooled, and a lot of shots we've seen a hundred times on in promotional material have been left of on the cutting room floor, but it comes together to be a very good time. The dynamic between Affleck's Batman and Gadot's Wonder Woman is especially compelling. Of course Gadot has always been sublime in this role (she's a co-lead to Batman and in ways the heart and soul of the film), and here Affleck really makes Batman his own, combining elements of all the previous Warner Bros. Batmen in entirely good ways while making it his own thing (of course Bale's Dark Knight is still on a level all his own, but that incarnation of Batman can't work in a film like this and doesn't need to. Ben's got this.). And Henry Cavill's Superman is everything we want the Man of Steel to be (he gets second billing, that's not a spoiler.).

As for the new characters, Ezra Miller's Flash is an absolute delight, as lovable as Grant Gustin's version of the character while also being uproariously funny. He steals nearly every scene is he's in, and is almost certain to be known as the breakout character. But Jason Momoa's Aquaman is nearly as much fun, and we're far more excited for his solo film next year than we were before. As Cyborg, Ray Fisher is left in the difficult position of competing with all of this in perhaps the least known character, and one who by his nature must remain cold and aloof most of the time, but he holds his own. And non-Superhero characters like Amy Adams Lois Lane and Jeremy Irons Alfred are given their chance to shine. J.K. Simmons Commissioner Gordon is a very small role, but he adds greatly to the film, as always (this is twice now that Simmons has stepped straight from a comic book as the physical embodiment of a classic character.).


As for Zack Snyder, his penchant for hyper stylized action has never been put to be better use, and the melding of the two directors works much better than we may have thought. And there is a third influence, producer and DC mogul Geoff Johns, who permeates the film. His vast knowledge and love of the DC lore holds blend the film together into a cohesive vision. This is also a much lighter and kid friendly film than the DCEU has been giving us, but not nearly as cheesy as Batman v. Superman's insipid melodrama. There are plenty of nits to pick that will bug some more than others.(We could spot the demustachification effect every time, but instead of it ruining each scene for us the way it did the critic next to us, we were just please that it looked better than it could have.) Yes, it's true that the Amazon armor shows a more skin this time around, but as much as liberal feminist side of us would like to chalk that up to sexism and a male eye behind the lens, watch 300 Spartans running around in capes and speedos, glistening with baby oil and you'll plainly see that it's just Zack Snyder. Dude likes himself some muscles and skin.

The bottom line is that Wonder Woman, which was more complete and smooth, is still the best  DCEU film. But Justice League is easily second, and by much more than default. From here on out we can look forward to these films without trepidation or qualification. Again, this is a somewhat disjointed film that doesn't achieve perfection, and feels a bit rushed in it's execution at times, but it does achieve being a thrilling, funny and sometimes touching spectacle, and was fully satisfying as the Justice League movie we've been waiting for since playing Super Friends with our cousins in Grandma's backyard when we were six. We're very glad we already have tickets to see it again this weekend, and we're likely to go two or three times after that. Batman, Superman, Wonder Woman and friends have been done, well . . . justice.