Movie Review: "Mudbound" Is A Downbeat But Involving Period Drama That Is All Too Topical 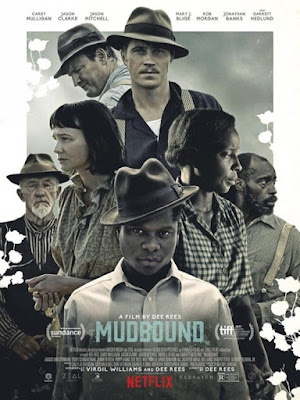 Even a year ago, and certainly two years ago, I would watched Mudbound and comforted myself with the thought that we have come far in terms of race relations, and that the shame of the past in the American South is just that, the past. We don't have the luxury of that kind of wilful ignorance anymore, and that's all the more reason why a film such as this should be seen by a wide audience. Unlike most of the films being talked up as potential Oscar contenders, Mudbound is streaming on Netflix instead of playing in a wide release on the big screen. And it will be a sad thing if prejudice against that medium keeps it from getting its due, the way it did with Beasts of No Nation, because as much as the big screen experience is the ideal way to view a film, anything that allows independent and important films to be seen by an audience is something that should be celebrated. 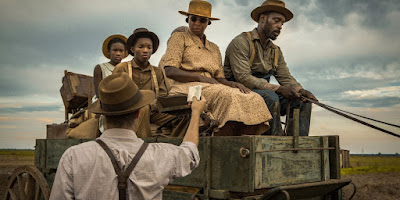 In 1939, Laura (Mulligan) is a 31-year-old virgin living with her parents in Memphis, Tennessee, when her brother's boss, Henry McAllan (Clarke), begins to court her. In a voice over narration, she explains that she was not particularly attracted to Henry, but revelled in finally having that kind of the attention from a man and was grateful for the opportunity to get away. The two are married, and Laura gives birth to two daughters.

Hap Jackson  (Morgan) is a tenant farmer working land in the Mississippi delta that his ancestors have worked for generations, in previous years as slaves. He is raising a family of his own and longs to own the land he works.

When WWII commences, Henry's younger brother, the handsome and charming Jamie McAllan (Hedlund), and Ronsel Jackson (Mitchell), Hap's oldest son, both enlist. Jamie becomes a flight Captain while Ronsel is a Sergeant. Ronsel enjoys the freedom he has in Europe, where he and other black soldiers are welcomed as liberators by white Europeans, in stark contrast to the way he is treated at home.

Meanwhile, Henry buys a farm in Mississippi and abruptly moves Laura and their children there, along with his widowed "Pappy" (Banks).When Laura's children grow sick with the whooping cough, Henry asks Florence (Blige), Hap's wife, to help Laura tend to them and Laura later asks her to stay on as a housekeeper.

The war ends, and Ronsel and Jamie return home, but Ronsel is hardly greeted as a hero. He is back to being at best a second-class citizen in the segregated life of Mississippi. After Ronsel and Jamie happen to meet in town the two become friends. Jamie, who is suffering from PTSD, sees in Ronsel someone whom he can relate to more than anyone else else in town, and allows him to ride in the front seat of his car, and share a drink with him. The two become friends and confidants, though due to his father's virulent racism, there are limits as to how open Jamie can be about the friendship.

The film is told with rotating voice over narrations, especially from Laura and Florence, and they play a little like a Terence Malick device, except here they actually work because the characters do not mumble or ramble, and it gives us an extra glimpse inside of people who are no really allowed by society to express what they are really thinking and feeling.  Mulligan, Blige and Morgan are particularly strong, bringing a lot of nuance and multiple layers to their characterizations. Clarke is a truly terrific actor, and it is too his credit that he's the kind of actor that always places the film above himself, always trying to give the performance that is required to tell the story, not a scene stealing showcase. Since Henry is such a dullard, that holds him back a bit from making a hug impression, but it is not fault of his acting. Hedlund is a strong presence as Jamie (though his accent is a bit sketchy), and Mitchell's Ronsel is very nicely played. Veteran supporting player  Jonathan Banks (Beverly Hills Cop, Wiseguy, Breaking Bad, Better Call Saul) makes quite an impression as Pappy, making us want to believe at times that there is something better inside this man, which causes the realization that he's even worse than we think to be all the more upsetting.

The films occasionally teeters on the edge on soap opera, especially when it comes to Laura's attraction to Jamie (there are two kinds of people in this world, those who liked Legends of the Fall, and those with taste) but manages to stay on track most of the time, and Mulligan and director Dee Rees make Laura such a strongly developed character that even this plot element plays well enough. Rees approaches the story with a bleak visual style that somewhat recalls John Ford's The Grapes of Wrath, and she and cinematographer Rachel Morrison go for painting pictures and over money shots (both establishing themselves as skilled artists to watch for.).

This is such a dismal and at times uncomfortable film that it's hard to imagine it being a hit with the masses, but it packs a powerful punch, and holds a mirror up to the world we live in and shows us what we need to see.