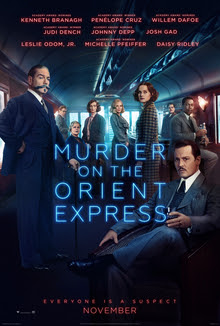 One of Agatha Christie most famous and celebrated novels, Murder On The Orient Express has been adapted more than once on stage, film television, with the most famous version being Sidney Lumet's 1974 big screen version, which won Ingrid Bergman an Oscar. And for those who didn't find that version to their liking, there was the television version with David Suchet, perhaps the single actor most indelibly associated with the character of Hercule Poirot. A new version wasn't exactly necessary, but when is that really a factor in making a new version of anything?

In 1934, famed detective Hercule Poirot (Branagh) is wrapping up a case in Jerusalem when he gets a wire stating that he is needed urgently to consult on a delicate matter. He runs into an old friend named Bouc (Bateman) who works aboard the legendary Orient Express, the only train that can get Poirot where he needs to go, and Bouc is able to pull strings to accomodate his friend despite the train being completely booked, a highly unusual circumstance during this time of the winter.

While on board, Poirot meets an interesting assortment of characters. Most interesting is Edward Ratchett (Depp), a "businessman" who implores Mr. Poirot to be his personal bodyguard while on the train, as he fears for his well-being, having recently received some threateningly letters. Poirot declines, stating that he does not like the man's face (and frankly, being the first time in a while that the aging superstar has really shown his face on film without the benefit of heavy makeup, he's probably not alone.). The next morning, Ratchett is found stabbed to death. With the train halted due to snow build up on the tracks, and with the evidence and suspects piling up, Poirot finds himself diving into a case that could be his most challenging yet.

Branagh is very much in his element here, doing what he does best: taking a grand and stagy character piece and turning into into a masterful piece of filmmaking. The pacing is perfect, and Branagh's clever shot selections rely less on coverage than on building a set the allows his cameras to follow Poirot throughout every inch on the train, and occasionally venture outside (there's certainly a CGI element to these shots, but it's there to augment the practical effects.). There is a sense of big screen grandeur that one might not expect from a film set primarily inside closed quarters, and Branagh justifies the indulgence of shooting Murder On The Orient Express on 65 millimeter Panavision cameras (the last four in the world, in fact) far better than Quentin Tarantino did with his lackluster production The Hateful Eight, which made the large format feel completely redundant. It's only a shame that Thor: Ragnorok has a firm hold on most large format screens until Justice League hits on November 17th (Branagh's lust version of Hamlet also ran into the problem of two few screens available to show off his vision, as did Tarantino when he was foolish enough to try to face off with The Force Awakens.).

In keeping with the tradition of his post Henry V Shakespeare films (and the Lumet version of this story), Branagh has packed the train full of an all star cast. Johnny Depp works very well as Ratchett, sinking his teeth into the role and clearly enjoying the chance to stretch himself by giving essentially the same performance he did in Black Mass instead of the same one his gave in Curse of the Black Pearl for a change. Regardless, he nails it. Daisy Ridley feels perhaps a little young for her character, but it plays well enough, and he she has a lot of chemistry with Branagh in their scenes together (and with Leslie Odom, Jr., best known for Red Tails and his Tony Winning performance as Aaron Burr in Hamilton.). Judi Dench, Penelope Cruz and particularly the luminous Michelle Pfieiffer emerge as the standouts among the standouts, though Josh Gad and Willem Dafoe have some really wonderful moments. But however strong the rest of the cars, the train wouldn't move without an engine, and Branagh the actor is that engine. guiding the proceedings from beginning to end, and it's as entertaining a star turn as we've seen all year. We readily admit that we are big fans, and while he was glorious in Dunkirk, he hasn't truly had the opportunity to play the lead in a while, and if there was any question as to whether he still has the presence to carry a film, it should be put to rest now. And as a director, his flamboyant mix of the cinematic and the theatrical makes far better suited to the material than Lumet, who was out of his element with a star studded whodunnit (he was always better with grittier, more low-key pieces.).

Cinematographer Haris Zambarloukos, Production Designer Jim Clay and costumer Alexandra Byrne all deserve Oscar nominations, as does composer Patrick Doyle (in particular, he and Branagh deserve a nomination for the haunting song "Never Forget," sung by Pfieffer, which plays under the ending credits.).

Not everyone is loving this film as much as we did, and make no mistake, it's nothing more than an expertly made throwback Hollywood mystery flick, but it's also nothing less. It's likely to be one of the best popcorn films of the holiday season.