Movie Review: "Coco" Is One Of Pixar's Most Enchanting And Emotional Films 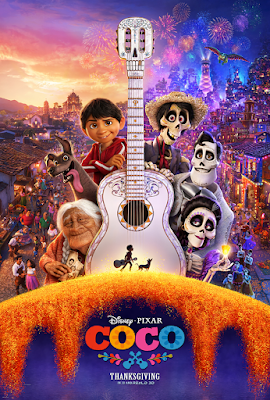 There are two types of people in this world: those who love Disney-Pixar, and those without souls. But the house of magic has been around for more than 20 years, and while even what we consider to be their only true misfire (The Good Dinosaur), wasn't terrible by any means, the days when the label guarantees major awards and being one of the top three best films of the year simply could not last forever. As such, critics and audience enter the latest film with a little more uncertainty than they used to, and we've found that the general excitement level for Coco has seemed to be lukewarm. If you are in the crowd that doesn't care much about it, we are here to change your mind.

Twelve-year-old Miguel Riviera (voice of Anthony Gonzalez) lives in the small, fictional Mexican village of Santa Cecilia. Miguel dreams of becoming a musician like his idol Ernesto de la Cruz, a popular singer-songwriter and film star who died when he was crushed by a bell in a live concert. However, because Miguel's great-great-grandfather left his family to achieve his musical dreams, his family has banned music for generations. Because of the ban, the only relative Miguel likes is his great-grandmother Coco (voiced by Ana Ofelia Murguia.). On Dia de Muertos, after Miguel inadvertently damages the photo with Miguel's great-great grandfather's face ripped out that is used for Mama Imelda's ofrenda, he finds a bent section of the photo revealing that his great-great grandfather used a guitar similar to De la Cruz. This causes Miguel to believe that he and his family are direct descendants of De la Cruz (voiced by Benjamin Bratt.).

When Miguel attempts to participate in a talent contest using a guitar he kept away from his family, his father destroys it and he leaves. Looking for a way to participate in the talent contest, Miguel infiltrates De la Cruz's mausoleum to steal his guitar and use it in the contest. However, he becomes a type of ghost unable to be seen or heard by the living except for Dante, a street dog he pets often. In the cemetery, Miguel meets his skeleton deceased relatives who are surprised that Miguel can see them and is there with them. They believe this is related to Imelda's inability to cross "the other side" and they take Miguel to Land of the Dead, an afterlife dimension where the deceased people come to visit their relatives on Día de Muertos. There he meets Hector (voiced by Gael Garcia Bernal), a quirky and opportunistic dead man who is desperate to get to the other side but can't because no one has put up his picture on an ofrenda. Meanwhile, while Miguel runs into some family members, they refuse to help him get back unless he promises gives up music forever.

Coco is easily Pixar's best film since Inside Out, and ranks among their all time best. Itshows that for all of the current emphasis on sequels and playing it safe, they can still create a charming, sweet and visually marvelous tale that breaks the mold of everything you expect from a Disney animated film while still being everything you want from a Disney animated film. It is filled with charming characters and atmosphere of wonder and magic. It's hard for anyone with any artistic aspirations not to strongly identify with little Miguel, whose passion for his music makes you instantly root for him, and it's easy to share his frustration with his family close minded attitude, but they are loving family nonetheless.

There were those immediately jumping to the conclusion that Pixar was remaking The Book of Life after the initial trailers, and the comparison is more than understandable. However, Coco is a movie entirely it's own, with a different story, different characters and situations. It's really a bit like calling What Dreams May Come a remake of Heaven Can Wait. This version of the afterlife is a little less stylized but it's every bit as marvelous.

If you are the kind of person who cried at Up (also known as a good person) be prepared to be hit hard by this film. We admit that the emotion was heightened for us by having no living parents or grandparents, but when the lights came up, our 10-year old niece was smiling and chattering away until she looked at us and asked "Wait . . . are you guys crying?" We are not trying to be funny when we say she had to pull us together. It's also perfect timing for Disney to make a film set in Mexico, especially one so indelibly human.

This film has it all: adventure, love (no central romantic love story it does have a deeper touch of romance) and plenty of hearty laughs. It's by far one of the best films of 2017 and may take our top spot.  Make this one a top priority to see in theaters.