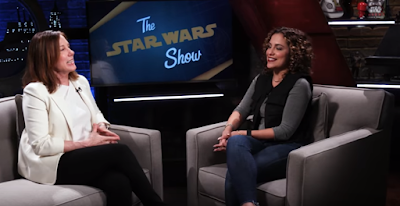 When you spend over four billion dollars to purchase Lucasfilm from George Lucas you want to make sure you get your moneys worth.  Well that's exactly what Disney are doing as Lucasfilm President, Kathleen Kennedy revealed their Star Wars intentions for the next ten years.

Kennedy sat down with Andi Gutierrez on The Star Wars Show  and discussed the future of Star Wars and what direction they intend to take:

"We're sitting down now, we're talking about the next ten years of 'Star Wars' stories, and we're looking at narratively where that might go," she said.

She added that they working on future stories beyond "Episode IX" with a new set of characters in Rey (Daisy Ridley), Poe (Oscar Isaac), Finn (John Boyega) and BB-8. Aside from that, the Lucasfilm group is also interested in working with people who want to take "Star Wars" to places that they haven't explored yet.

Kennedy ended her statement by saying, "It's a vast galaxy far, far away, so the possibilities are endless."