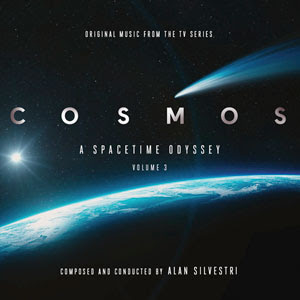 COSMOS: A SpaceTime OdysseyVolume 3
Composed and Conducted by ALAN SILVESTRIINTRADA Special Collection 388
In this third volume of music from COSMOS: A SpaceTime Odyssey, composer Alan Silvestri continues to develop his musical universe laid out in the first two episodes.  Mainly scored for episode three, this part focuses on the how humankind adapts to its surroundings using pattern recognition that has evolved over eons -- distinguishing predator from prey, dangerous from helpful plants, and on into our study of the cosmos itself.  As with the first two volumes, Silvestri's music is gloriously symphonic, with some modern synth-based rhythms. Intrada presents this third visit to the Cosmos universe, produced by the composer, including additional bonus tracks not previously released.   Inside the colorful packaging are a few words from composer Alan Silvestri describing his journey to scoring this series when he began his relationship with team Sagan back in 1997 with the film Contact. This release is the penultimate album in Intrada's four-volume trip through Silvestri's musical odyssey.INTRADA Special Collection 388Barcode: 7 20258 53882 6Retail Price: $19.99SHIPPING NOWFor track listing and sound samples, please visit: http://store.intrada.com/s.nl/it.A/id.10933/.f