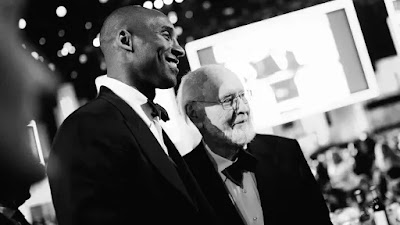 Retired basketball player, Kobe Bryant is a huge fan of John Williams.  In fact Williams scored a short film on Kob Bryant called "Dear Basketball."  FastCompany.Com explore the relationship and friendship between the two and discover what Bryant has learned from the composer

So what has Kobe learned from observing and shadowing his new mentor over the last few years? “The ability to ask questions,” explains Bryant, emphasizing, “not questions in which he already knows the answers but honest questions to get the person thinking about how to make a piece better.”

Instead of strictly directing, says Bryant, Williams constantly asks questions and challenges colleagues to think deeper about their performance. It inspired Bryant to better engage and work with his teammates to be “the best versions of themselves.”

“If you want to help your teammates be better, it’s more than simply creating open shots for them–giving them the ball–you have to inspire them to be the best best version of themselves and to think logically about what those steps are,” said Bryant.