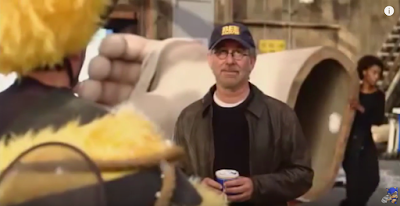 Check out this commercial for Bee Movie which features Steven Spielberg taking a break.  While on a break Seinfeld finds his scene is just not working and finally screams for Steven to help.

Bee Movie is the first motion-picture script to be written by Seinfeld, who co-wrote the film with Spike Feresten, Barry Marder, and Andy Robin. The film was directed by Simon J. Smith and Steve Hickner and produced by Seinfeld, Christina Steinberg and Cameron Stevning. The production was designed by Alex McDowell, and Christophe Lautrette was the art director. Nick Fletcher was the supervising editor and music for the film was composed by Rupert Gregson-Williams.

The cast and crew include some veterans of Seinfeld's long-running NBC sitcom Seinfeld, including writer/producers Feresten and Robin, and actors Michael Richards (Seinfeld character Cosmo Kramer), Patrick Warburton (Seinfeld character David Puddy), and Larry Miller (who plays the title character on the Seinfeld episode "The Doorman"). Coincidentally, NBC was host to the broadcast television premiere of the film on November 27, 2010