VIDEO: Indiana Jones and The Arabian Nights - The Piano Guys 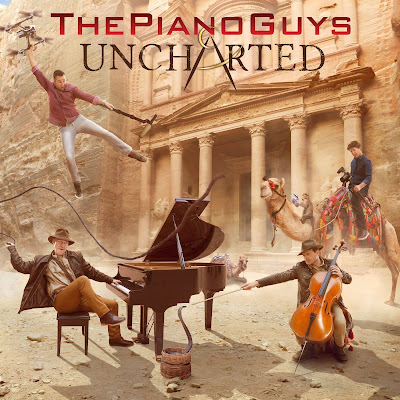 Ever since they burst onto the scene a few years back with their Star Wars tribute, "Cello Wars," The Piano Guys have paid homage to many different films and musical genres. For their latest album, Uncharted, one source of inspiration was none other than Indiana Jones and his many adventures. The video for their new single, "Indiana Jones and The Arabian Nights," was released today, and one location in particular should be very familiar to fans of Indiana Jones and the Last Crusade.

Check out the official description, then watch the video, below:

Three years ago we embarked on an insane archeological quest: To conquer all Seven Wonders of the World. With music. Why? As Henry Jones (Sr) once said, “Illumination.”

What began at The Great Wall of China continued on at the Christ Redeemer Statue and the pyramids of Chichen Itza. And now we present the ancient, stoic “Rose City” carved into rock: Petra, Jordan!
Yes, this is a real place. Not just a figment of a set designer employed by Lucasfilm, LTD. We say real, but we should actually say “unreal.” Hard to believe a city half as old as time, carved out of sheer rock in the middle of the desert over 2,000 years ago still stands, whispering stories of its history through weather-worn stone artistry and intricate waterways.

Just to give you an idea of its scope, Petra is home to over 800 monuments, buildings, halls, tombs, temples, and gateways sculpted from kaleidoscope sandstone. Its access is guarded by a narrow, protracted 1,000 ft high (300 meter) canyon. This remote desert city thrived in its prime because of an intricate, ingenious aqueduct system that carried water over great distances to store in cisterns. Arab tradition believes that Petra was the site where Moses of the Old Testament struck the rock to draw forth water.

Petra has also been the site of many Hollywood movies. The first that comes to mind? Maybe something to do with seeking the Holy Grail in a fedora hat and a whip sidearm?

Indiana Jones and the Last Crusade launched Petra’s “Treasury” Tomb into stone celebrity status — casting it as the lost home of the Holy Grail. What a movie! And what a soundtrack! Thank you, Mr. John Williams! How could we choose any other theme to laud the epicness of Petra’s Wonder? But the lively, adventuresome “Indy” theme needed a more Arabic flair in honor of this relic-city. As we often do, we turned to classical music for inspiration, motivation, and more compositional content.
In 1888, a Russian composer named Nikolai Rimsky-Korsakov composed a landmark symphonic suite entitled, “Scheherazade,” based on a collection of Middle Eastern folk tales collected over many centuries. You’ve definitely heard of some of them — Alladin, Ali Baba and the 40 Thieves, and the Seven Voyages of Sinbad. The book is called “Arabian Nights,” and the storyteller in the book is the woman, Scheherazade. It is considered an international treasure among storybooks.

Just listen to the incomparable melody written by Rimsky-Korsakov at 0:52. No “wonder” it is timeless! Listen to the entire “Scheherazade” Suite here: https://www.youtube.com/watch?v=SQNym...

We present to you an amalgam of old and new, a marriage of then and now — a mashup of film score and historical – the hiscorical, “Indiana Jones and the Arabian Nights!”

Many of our Petra scenes were filmed carefully amidst sky-high canyons using a drone’s camera. And in case you were wondering, we did actually go in the middle of a bustling Jordanian street market and film a cello playing classical music. In fact, just as we were leaving a man grabbed us and asked if we’d play more over by his cart so he could sell more fish. It was a tempting offer.

Jordan is an incredibly beautiful country with friendly people, tasty food, and so much to see. Many thanks to the people of Jordan for being so hospitable to us, to Abercrombie & Kent, and especially to Moawia ”Moe” Quataish, our incredible on-site production manager, translator, and dry humor specialist. Moe, you’re such an awesome shabb!! Also, special thanks to Tobias Bradford for helping us realize this dream.

If you’ve made it this far in the description we bestow upon you an honorary doctorate degree in archeology from TPGU. To celebrate your induction, tell us your favorite Indiana Jones line in the comments. One of ours is, “Sallah! I said no camels. That’s five camels. …Can’t you count?!”

You can purchase the album, Uncharted, by The Piano Guys via their official shop, iTunes, Amazon, and Google Play.