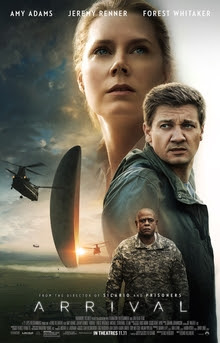 One of the most welcome developments in cinema in recent years has been the return of smart, true science fiction. We love a good fantasy space opera as much as anyone (we wouldn't be writing for a Lucasberger site if we didn't), but every time we hear someone say a movie like The Fifth Element is one of their favorite "science fiction" movies, we get pounding headaches.). Whatever your opinions of Gravity, Interstellar and The Martian, they're clearly more ambitious and serious-minded than the popcorn fare that dominates the genre and it's been encouraging to see A-list filmakers treat science fiction as a genre worthy of even moderately loftier goals than aliens blowing up humans and vice versa (not that we can't enjoy a good junk food sci-fi flick, but too often that has been the only kind.). Denis Villeneuve (Prisoners, Sicario) will certainly be on the A-list now if he wasn't before: his new science fiction drama Arrival is a genuine masterpiece that ranks among the best films of 2016, and among the best science fiction films of the last 20 or 30 years. 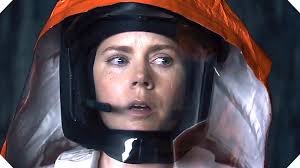 Amy Adams stars as Dr. Louise Banks, a linguist and college professor who is contacted who is brought in by the United States government when a series of giant objects appear around the world, and the objects carry visitors.  A team of experts in various fields is being quickly assembled to ascertain exactly what the visitors purpose is here on Earth. Louse is paired with scientist Ian Donnelly to develop a way to communicate with the aliens. Meanwhile, we are given occasional, glimpses of Louise' thoughts, as a moment shared both with her daughter Hannah comes to her mind. Some of these moments a joyous, some are mundane and some are painful,

Anyone expecting a fast moving, action-packed alien invasion flick will be sorely disappointed.  This is closer to Contact than it is to Independence Day. Much of the film consists of Louise and Ian trying to communicate with the aliens, and here the film is fortunate to have the immense talents of Renner and epically Adams. Adams prives once again that she is one of her generation's finest actors, irrespective of gender, and after seeing her relegated to too many supporting roles, it's gratifying to see her as the unquestioned lead. While some with a shallow view of acting may accuse her of "just being Amy Adams" due to the lack of any overt transformations (aside perhaps from being less sunny and cheerful than the characters that made her famous), her work here is a master class in screen acting, with every moment, every choice, every word and movement marked by pure emotional honesty which creates a full-blooded, multi-dimensional human being.  It's one of the finest performances of the year. And to unabashedly stand on a feminist soapbox, anytime a Hollywood film gives us a female protagonist this strong and
fully realized there is cause for celebration, and based on this and Sicario it's becoming a staple of Villeneuve's work. 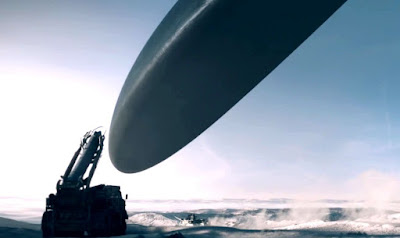 Villeneuve's direction is in every way equal to the film's intellectual ambition. His pacing and Blade Runner sequel, the question has been answered with a resounding yes. The story he's working with here feature some surprises and twists which should be preserved for the viewer,  but it would be a gross injustice to the film to label it a mere "twist-ending" movie. It's rewards are much deeper than that.
storytelling reflect the same patience and attention to detail Louise shows her communication with the aliens, and while he doesn't try too hard to razzle-dazzle us with showy camera movement or bombastic style, his shot compositions are exquisite and his overall visual and scenic sensibilities are sublime. For anyone who questioned whether this was the right filmmaker to helm a
We realize that this is the sort of review which may lead some readers to feel the film has been overhyped to them and leave them disappointed, but it's difficult not to gush about a film which has this much going for it.  Arrival is gourmet science fiction, but it also transcends the limitations of being a genre film to simply be a great film. This one is guaranteed a spot on our list of the best films of 2016.