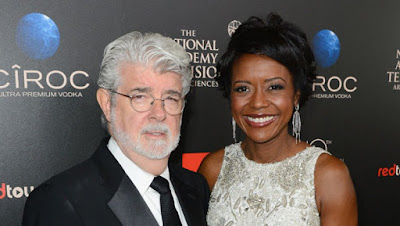 Steven Spielberg, founder of USC Shoah Foundation - The Institute for Visual History and Education, will present Mellody Hobson and George Lucas with the Institute's 2016 Ambassador for Humanity Award at the organization's annual gala, to be held this year in Los Angeles on Dec. 8, 2016. Actor Harrison Ford will be one of the evening's special guests, with additional guests to be announced. The gala presenting sponsor is The Walt Disney Company, a dedicated supporter of the organization.

Mellody & George will be honored for their steadfast commitment to dynamic and innovative humanitarian efforts, and their longtime support of USC Shoah Foundation.

Hobson is the president of Ariel Investments. Lucas is one of the world's most distinguished filmmakers.

"Mellody and George are worthy recipients who understand the importance of vigilance and education in countering hatred around the world," Spielberg said. "We are pleased to recognize them for their remarkable commitment to education and diversity, to visual arts and storytelling and to leveraging technology for humanitarian efforts."

Lucas is a graduate of USC, and both he and Hobson are esteemed leaders and supporters of the university and its diverse community.

"Mellody Hobson and George Lucas not only share this university's passion for education, research, inclusion and diversity, but they also understand the value and importance of preserving and sharing the 54,000 testimonies in USC Shoah Foundation's Visual History Archive," said USC President C. L. Max Nikias. "As recipients of the Ambassador for Humanity Award, they join an inspiring group of past honorees whose collective dedication ensures that we keep the flame of memory alive by educating and enlightening future generations."

Read more over at Yahoo