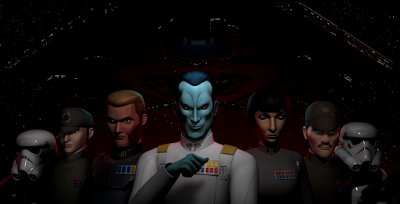 Join hosts Ruari and Gab in this special guest interview with actor Lars Mikkelsen, best known as the voice of Grand Admiral Thrawn in Star Wars Rebels and for playing Charles Augustus Magnussen in Sherlock, Troels Hartmann in The Killing, Viktor Petrov in House of Cards, Martin Vinge in Headhunter, Thor in When Animals Dream, Magnus Bisgaard in Those Who Kill and Those Who Kill - Shadow of the Past, Forstander Frederik Heck in The Day Will Come, Peter Karlsen in What Richard Did, Dimitrije in Montana, Thomas in The Escape and Thøger Jensen in 1864.

In the interview they talk about how Lars decided he wanted to become an actor, how Lars was originally cast as the voice of Grand Admiral Thrawn on Star Wars Rebels, whether Lars was aware of Thrawn's popularity prior to being cast in the role, whether Lars was given any instructions by the Rebels crew on how Thrawn should be voiced or whether he was allowed to create the voice himself, what is it about characters like Thrawn and Charles Augustus Magnussen that appeals to Lars as an actor, the role that Lars has found the most challenging in his career so far, Lars's upcoming acting roles and other projects, how Lars feels being part of a beloved franchise like Star Wars, whether Lars and his brother Mads have talked about Star Wars since both became part of the franchise and the type of acting that Lars has found to be the most challenging.