DreamWorks "Trolls" Is A Mixed Bag, But Timberlake and Kendrick Really Shine 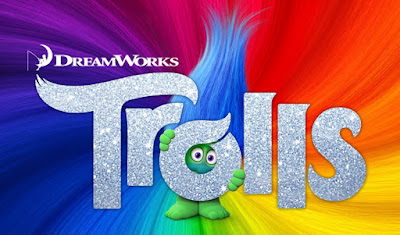 In a year of exceptional animated films, from Zootopia to Kubo and The Two Strings, DreamWorks Trolls isn't going to be giving any of them a run for their money when it comes to competing for classic status. But it's also not as bad as you might fear from such a blatantly toyetic property that seems to be

Trolls are small creatures who live in a perpetual state of happiness and cheer, singing, dancing and hugging all the time. Their existence is threatened, however, by the Bergens, large, foul and miserable creatures who are incapable of feeling anything but misery, but have discovered that they can briefly experience the sensation of happiness if the eat a troll, which is probably not meant to be as blatant a metaphor for pot usage as it seems to be. The Bergens build a cage around the tiny Troll Tree, and every year, during the festival of "Trollstice", each Bergen consumes a Troll. This year is special, as King Gristle's young son, Gristle, Jr. (Mintz-Plasse) will be tasting his first Troll. But the Trolls escape through and underground tunnel, lead by the intrepid King Peppy (Tambor). King Gristle (Cleese) is so angry that he banishes his head Chef (Baranski), who is in charge of the yearly Troll preparation.

We pick up the story twenty years later, when King Peppy's daughter, Princess Poppy (Kenderick)
throws a, epic party to celebrate the anniversary of the Troll's escape, with every Troll attending, with the notable exception of Branch (Timberlake), a reclusive, cynical survivalist type who doesn't sing or dance, or do any of the normal Troll activities. He just builds his bunker and warns everyone of impending doom. It turns out of course that Branch is right, and the noisy party is just the thing the conniving Chef needs to lead her straight to the Trolls and use them to try to get back in the good graces of the newly crowned King Gristle The Second. Poppy enlists the aid of Branch to help her rescue the Trolls captured by Chef, and they must work together, combining Poppy's sense of hope and fearlessness and Branch's cautious resourcefulness and brains to save the day. 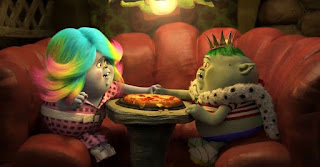 The plot is by the numbers, and the jokes never get better than mild chuckle territory (there's a lot of bathroom humor, including sparkling Trolls who fart glitter.). The movie alternates between just cute enough to overly cutesy, and just catchy and fun enough to kind of obnoxious. But through it all, Kendrick and especially Timberlake maintain a presence that carries the movie. Yes, that's right, we are praising Justin Timberlake. This may be a surprise to people who have followed our reviews for a long time and know that we've always been skeptical of his acting future: The Social Network was a great piece of casting used effectively, but not a truly great performance, and In Time was just dreadful. But his low key turn in Trouble with the Curve was genuinely charming, and damn it, as critically incorrect as this statement is, he did a great job as Boo Boo in Yogi Bear. Animation sees to be a perfect niche for him, but as his undeniable talent develops further into genuine skill, he shows more and more potential to be a movie star. He oozes screen presence and star quality in this movie, there's no denying it. The abundance of musical numbers ranges from being the film's greatest asset to one of it's annoying qualities, depending on the song, but all three of Timberlake, Kendrick and Deschanel (who gives a gorgeous rendition of "Hello (Is It Me You're Looking For?") all really get a chance to really strut their stuff (we particularly enjoyed Timberlake and Kenderick's duet of "True Colors.")

In a crowded November movie season, this isn't a top priority unless your little ones are really itching to go to a movie. If they can hold off a few weeks until Moana, this is one that can keep until home video. But if not, and if more than one kid's movie is in your budget, you'll survive this one and may even come out the theater humming "Can't Stop The Feeling", even if you don't find yourself sharing your kids amusement at the glitter farts (sadly, we know some of you will love that, and you know who you are.).