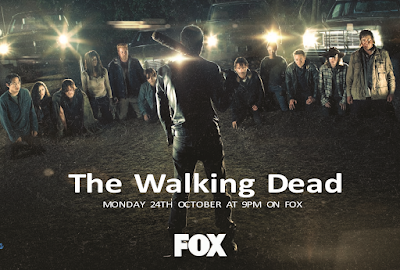 Season 7 of The Walking Dead is set to explode onto our TV screens Monday 24th October on Fox and we can bring you a Q&A with Andrew Lincoln and Norman Reedus.  Don't worry, there are no spoilers but check out one of the answers from Norman Reedus.  Is that a hint of who Negan chooses?


Andrew Lincoln on Negan:
What does the character Negan bring to the series?
We are seven years in and we are only unleashing now probably the greatest villain of the series. It's a very thrilling and exciting time. It does feel like we are smashing everything and starting over.

What makes Negan more of a threat than those Rick has been up against in the past?
The Governor was much more about secrets. You didn't know what the Governor was doing. Negan is very clear. He is very open with the people he meets. There is a charm, but there is a terrifying logic as well.

Has Rick met his match at this point?
Without a doubt he has, absolutely. Everything is changed. The playing field has irrevocably changed.

What does Jeffrey Dean Morgan bring to portraying Negan?
Jeffrey Dean Morgan is amazing. He feels like a presence who has always been here. That's how easy it has been for his assimilation. He's also having a lot of fun, which is key to this kind of role. You need to be having a great relish. I love acting with him. He's so in it, and he makes great choices.

Norman Reedus
As they kneel, what does the group realise about the world now?
They realise they are not driving the car. There is somebody else who has a lot more territory than they do who is calling the shots. It’s super interesting and great that there is a character that is going to put fear into them. One of my favourite parts of the Season 6 finale is watching Rick be not in control. Rick has lead these people for so long and he might have just lead them all into the water to drown.

What does Daryl realize?
Mistakes will end your life.

What makes Negan more dangerous than anyone this group has come across?
Negan is a cold-blooded killer and he’s got the numbers. He’s got an army of people who all call themselves Negan. They are doing everything he says. There’s no way around that right now.