Tim Burton's "Miss Peregrine's" is an Intense, Engaging and Muddled Piece of Storytelling

If there is any mainstream filmmaker that requires you to use more qualifiers when reviewing their works than Tim Burton, (and sorry, fans, but Tim Burton is a very much mainstream director), I'd like to know who it would be. Is it a good Tim Burton film, or an all around good film? Is it dark but delightfully childlike, or is it just dark and angry? And is Johnny Depp entertainingly over the top, strangely distant, annoyingly over the top or (rarely) absent altogether? At the same time, Burton can be self-reviewing, simply because there are many who will latch onto it immediately because it's a Tim Burton film, as well as those who will dismiss it entirely. I am a strong believer that either choice is a mistake, as I have thoroughly loved many Burton films (The Nightmare Before Christmas, Ed Wood, Edward Scissorhands), hated a smaller few (Planet of the Apes, Sleepy Hollow, Mars Attacks!), felt both ways at once (Batman Returns), and found many to be just middle of the road and wholly uninspired (Alice in Wonderland, Sweeney Todd). On the whole, I do consider myself a fan, but a casual and discriminating one.

Miss Peregrine's follows the story of Jake Portman (Asa Butterfield), a 16-year old, pasty skinned, dark haired and lanky boy who doesn't quite fit in (shocking for a Burton film, I know.). Jake isn't particularly close to his parents, but he was always hugely fond of his Grandpa Abe (Terence Stamp), who filled the boy's head with amazing stories of his own childhood growing up at a school in Wales, a home for "Peculiar Children." There was an invisible boy, a girl who could start fires, a girl with impossible strength, a girl who was lighter than air, and a headmistress who could turn into a falcon. But Jake was devastated when he became old enough for his parents to hit him with the apparent truth about these stories, as well as Grandpa's dementia, and Jake retained his love for the old man but not his trust, and the special bond that once existed between waned over the years. But when Jake witnesses Abe's death under highly unusual circumstances that support his stories, and the old man gives the boy instructions to find Miss Peregrine, everything changes. 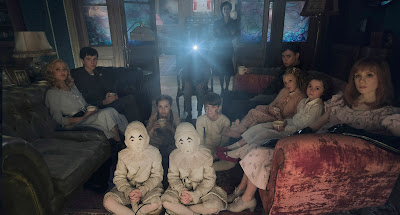 While it takes a little bit of time to get going, Miss Peregrine's Home For Peculiar Children is a wonderfully involving story, full of magic, heart, and a surprising amount of serious suspense. To dismiss it as Harry Potter Meets The X-Men is tempting, but it's an over simplification that doesn't justice to a movie that is really quite wonderful at times.   It's also much more gruesome than the trailers indicate, however, and very likely to give little ones nightmares. This is definitely for the tween crowd and above.

One thing that goes almost without saying with a Burton film is that the movie is visually pleasing, but is this case, the added presence of cinematographer Bruno Delbonnel (Amelie, Harry Potter and the Half Blood Prince, Inside Llewyn Davis) who has stood behind the camera for Burton's last three films but really gets the chance to do what he does best this time around, and production design by the extremely underrated Gavin Bouquet (best known for the Star Wars prequels, Stardust and Warcraft), this is truly one of Burton's best looking films, and his skills at action, staging and painting complex pictures have never been more exemplary. If you're the type who has been itching for October to begin, you'll probably be very pleased by this film. But the biggest departure from Burton's usual routine is the absence of Danny Elfman doing the score, which hasn't happened since Howard Shore scored Ed Wood (apart from Sweeney Todd, which, of course, came with its own music.). Fortunately, Michael Higham and Matthew Margeson create a score that is suitably Elfmanesque but has a stirring and beautiful identity of it's own. There does not appear to be a soundtrack album available, which is a shame, because the score these two have crafted deserves to be treated as more than just an adequate fill in for the absent Elfman. 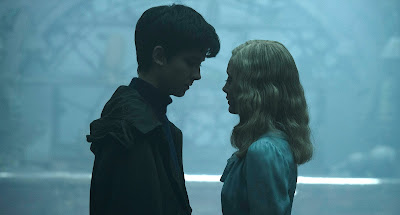 Butterfield continues to show himself to be a very likable protagonist, and in truth, losing the part of Spider-Man was probably the best thing that could have happened to him as it leaves him open to do a wider variety of roles and he is establishing himself as a minor rising star. Green is effective as Miss Peregrine, though it's a smaller role than you might expect and if you're in the crowd with me that is still trying to decide if you're a fan or not, this doesn't do a lot one way the other. Jackson is appropriately nasty, even mildly terrifying, and Judi Dench and Rupert Everett are very welcome, if brief, presences. The movie decidedly belongs to the younger actors especially Butterfield and young Ella Purnell as his love interest, but in truth all of them are wonderful (Georgia Pemberton's Fiona, and Cameron King's Millard, were personal favorites.). It also belongs to Stamp, who seems to be having a lot of fun with his role, and could be worthy of Best Supporting Actor talk if he'd had just a little more screen time.

The weaknesses and strength of the film are often connected: a mythology that is fascinating, imaginative, and so complex it is very difficult to follow at times and leaves a few plot holes in its wake, a genuine sense of danger and scares that kept me hooked but sometimes clashed with the spellbinding sweetness, and character relationships that raise a lot of interesting questions but often never even get attempts at answers. As far as the minor controversy from fans of the book over the choice to have Emma and Olive, the air manipulator and the fire-starter, respectively, switch places as Jake's love interest, I really want to answer it with a decisive "I just don't care," because it seems pretty clear to me that they are able to do more interesting things with Emma's powers and fire-starting, which is has been done many times before, seems best relegated to a very likable supporting ensemble character. However, I feel like I can't entirely make that opinion stick without having read the book, but in the end . . .  I just don't care. I was much more concerned with how ill defined the Twins were, both in terms of character and exactly what their peculiarity was, apart from the stigma of the creepy twins in The Shining (I hate, hate HATE the creepy twins in The Shining, and if you were a twin, so would you.).

In the end, this is another Tim Burton movie, and all which that implies. Whether you will enjoy it or not is based in no small part on whether you can reconcile sweetness, love and a sense of family and belong with watching Samuel L. Jackson eat a plateful of children's eyeballs.