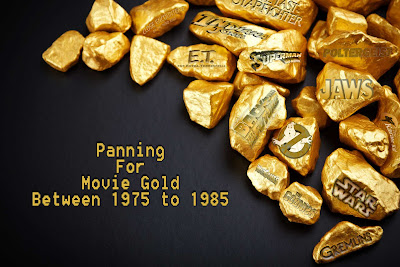 I love movies, they are an important part of my life.  After a busy day at work they are a perfect way to give you some escapism for a few hours.  Sitting in my favourite chair and willingly letting the director, writer and actors take me on a magical journey into their world which will be fraught with different emotions along the way.

Every now and then and if you are extra lucky you will find a gem of a movie that will stay with you long after the end credits have scrolled away.  This doesn't happen very often, it's a bit like panning for gold.  You keep searching for the gold but all too often you get nothing but dirt which you throw away and start all over again.  Then you find that sparkling gleaming piece of gold which you treasure and instantly know will be a hit with everyone.

I was born in 1972 and I was lucky enough to grow up in what I would call one of the golden age of cinema, the 70s and 80s.  Maybe I'm biased, maybe I'm looking back with my rose tinted glasses on but I strongly believe there was a decade where a good movie, no, no, I take that back, a classic movie was being shown every few months.  The movie river was providing gold more than ever.

1975 we had Steven Spielberg's Jaws which is, lets be honest here a golden classic.  An almost perfect movie.  1977 we had two gems, Close Encounters of the Third Kind, another Spielberg golden nugget and of course Star Wars which changed cinema in so many different ways.  The following year we were treated to a superhero masterpiece, Richard Donner's Superman with the perfect man of steel, Christopher Reeve.  A big budget superhero movie was a rare treat back then and boy did I believe a man could fly.

A new decade was upon us.  The 1980's was the decade I remember the most.  I was at the perfect age to soak in all the movie hype.  But would the golden age continue?  Well it certainly did and what a way to start a new decade.  The Empire Strikes Back hit movie screens and how much pressure was on George Lucas's shoulders?  The expectation after Star Wars was huge and boy did he and Lucasfilm deliver.  Also that year, but being only eight years old at the time I will admit that I didn't appreciate this film until many years later was Airplane!  A genuine funny movie with laugh out loud moments every few minutes.  An achievement that hasn't been repeated many times since.

Still the good times continued the following year.  1981 brought us one of my all time favourite films, Raiders of the Lost Ark.  It was the beginning of a wonderful relationship with Dr Jones and we're Superman II, another classic superhero film.  I can't let 1981 go without mentioning Disney's The Fox and the Hound.  I will admit now as I was nine years old and had no idea of what copyright meant but I had an illegal VHS copy of the animated movie.  It was a shocking copy but I must have watched that film at least 20 times on our Ferguson 'piano key' top loader video player.
still together to this very day.  General Zod and his friends were causing havoc on Metropolis in

Speaking of illegal VHS copies, the following year my dad brought home a movie.  Yes he knew a friend who knew a friend who got the latest Hollywood blockbusters still not released in the UK on VHS.  I was hoping for Disney's 'Watchers in the Woods' but what we got was this film called E.T. The Extra Terrestrial.  I had never heard of it and was disappointed on not getting the latest Disney film.  Anyway we watched the film, again a shocking copy which at times I had to adjust the tracking to get the best picture.  If any of the characters stopped talking then that background buzzing got louder and louder until someone said something.  Anyway, regardless of the quality I was blown away by this 1982 golden classic.  I must have warn the tape out having watched it so many times, beating the Fox and the Hound record the year before.

1982 was also the year where I had a few sleepless nights.  My fear of clowns I think started this year and was all down to another classic, Poltergeist.  Being 10 years old and seeing a clown come to life and drag a kid under a bed was one of the scariest things I had ever seen.  Well that and the tree.  That damn tree!

1983 and of course more Star Wars with the Richard Marquand directed Return of the Jedi.  This was my favourite of all the Star Wars movies.  I loved the Ewoks, I loved the forest moon of Endor and just thinking about that speeder bike chase brings a huge smile to my face.  1983 was also the year I discovered computers and my Sinclair Spectrum was always being used for gaming and programming long lines of BASIC to see a little man run across a screen spelling out my name.  Incredible!  This was the year Wargames was released and it was right up my ramdrive.

What a year 1984 was.  The classic movie river was really producing some gold.  The Karate Kid, Gremlins, Beverly Hills Cop, The Last Starfighter and of course Ghostbusters were all hitting the big screen.  Obviously I spent a lot of my pocket money at the cinema that year.  No Temple of Doom I hear you say?  Well that movie was significant for me.  It was the first time I was disappointed with a huge hyped up movie.  Yes I know a lot of you love the second Indy film but the story just didn't gel with me.  I think it was the movie that opened up my reservations and scepticism going forward and to not automatically think that every big movie was going to be to my taste.

How could 1985 follow that?  Well it did with more classics such as Back to the Future, Cocoon and The Goonies.  These were truly the golden years of movies.

The following few years still produced magic movies such as Labyrinth, Star Trek: The Voyage Home and Indiana Jones and the Last Crusade but I was starting to think the golden movie river was being over mined.  The gold was still there but it was becoming harder to find.  Maybe it was my age.  Perhaps I was growing up and the cinema magic was leaving me.  The classics were there just not as often.

For me the period between 1975 and 1985 were the golden age of cinema.  I was rich with classic movie moments which would stay with me to this very day.  These days I hardly get excited over a movie release, perhaps I've been spoiled over the years or maybe there's an element of over saturation.  I am still a kid at heart, I get a lot of my escapism from a good video game or re-watching classics.  The problem I have with modern movies is Hollywood is happy to settle for a gold-plated movie rather than the real thing.  Remakes and modern day sequels to classics all look good, they generate the hype but are they real gold?  Most of the time they're not, just a cheap imitation.  It looks good but you know it's not real gold.

As mentioned, perhaps I'm biased and looking back at that period I have a lot of sentiment, but for me just like your favourite jewelry that you've had with you for years, it will always be special and those ten years of movies will always have a special place in my heart.

Do you agree?  Perhaps you have a golden decade of movies, please let me know in the comments below.