Movie Review: "Inferno" Is As Skillful As It Is Silly 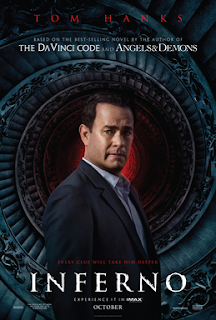 
Which is more important, a good story or a good storyteller? This is the question begged by Ron Howard's skillful and engaging film based on the supremely silly story that is Dan Brown's Inferno. For us, The Da Vinci Code, Howard's 2006 openning to his Robert Langdon trilogy, with slack pacing and and pretense combined with the often ludicrous story to overwhelm Howard's considerable finesse and star Tom Hanks' charisma. The 2009 follow up Angels and Demons fared better, with Howard seemingly much more aware that he was directing a commercial thriller rather than an Oscar-bait drama, Hanks turning on the charm to a much greater degree, and the delusions of profundity were much more confined. Happily, Inferno falls closer to the latter, offering a fast-paced and a well-crafted ride that manages to sail past it's own absurd story tendencies and occasional lapses into self-importance, anchored by perhaps Hollywood's most likable leading man. 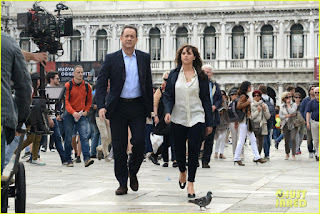 Professor Robert Langdon  (Hanks), Harvard's brilliant scholar of ancient symbols, wakes up in a hospital in Florence, Italy, with a head wound and no idea how he got there. Treating him is Dr. Sienna Brooks (Felicity Jones), an equally brilliant young physician who met Langdon years earlier when she was a child. When Langdon and Brooks are attacked at the hospital, they're forced to go on the run, attempting to solve the mystery of Langdon' wound and a mysterious bio hazard tube in the professor's possesion. All of this seems to be tied together by Dante's Inferno, because characters in Dan Brown stories are obsessed with flaunting their education and the fact that they've been to/are from Europe.

The story takes the usual twists and turns between medieval history and literature, pseudo-science and crazy cap Dan Brown made up, and grabs the viewer more than it probably should, except for when it goes off the rails and leaves us scratching our heads. The convoluted cast of characters includes a genius billionaire (Ben Foster), a couple of exotic mystery men (Omar Sy and Irrfan Khan) and a former flame (Sidse Babbet Knudson) of Langdon, and the ideas/issues touched on range from overpopulation to superviruses to ancient funeral practices to subtlely dropping the hints that you know a lot of stuff about Europe. But Hanks' star power is at near full-force here (Langdon isn't a character that gives him the chance to demonstrate the depth he does in his best work, but let's table the discussion of whether he fits the way Brown or his readers pictured Langdon and just admit a great actor is always welcome), and Howard is one of Hollywood's most technically proficient directors, crafting thrilling chases and near-miss escapes with virtuosity, even if he occasionally falls into the trap of trying too hard to innovate and over playing his hand when he does so. 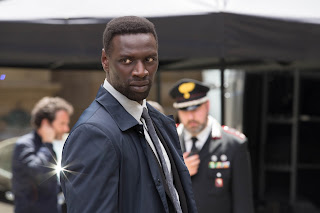 Howard's impressive talents are matched by his production team, with cinematographer Salvatore Totino beautifully lensing the European locales and editor Dan Hanley (joined here by Tom Elkins instead of usual partner Mike Hill) ratchest up the action and suspense with perfect rhythm. While Hans Zimmer's score isn't among his best, it's nicely unobtrusive and less bombastic than some of his other work.

Hanks is the standout among he cast, but Jones also reaffirms her star potential before her highly anticipated role in Rogue One , and she and Hanks make it good team. Hanks also shares great chemistry with Khan, to the point where we sometimes found ourselves wishing this was was a buddy movie showcasing them. Foster takes a role the could have been merely ludicrous when played by a lesser actor and makes him just believable enough, and Sy shows great presence and magnetism. 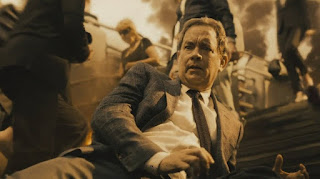 Screenwriter David Koepp has a talent for taking dense, convoluted novels and streamlining them to be fast-paced and comprehensible films, but this time, whether the fault lies with Koepp or Brown, the story doesn't quite come together. We're asked to suspend disbelief through a few too any outrageous twists, follow a few too many confusing plot threads, and listen to a few too many pompous speeches that think they're smarter than hey really are. But Koepp still manages to keep things taut and exciting, which has made him a welcome addition to thr franchise's last two installments. And again, Howard's talent for pacing and adrenaline makes a world of difference.

Inferno isn't the kind of film that stands up well against intense plot scrutiny, but as a fun thrill ride it delivers well enough. and we're on board for almost any ride with Opie and Uncle Ned. Hopefully someday these two will make another Apollo 13, but for now even a lesser work rom them offers considerable pleasures. 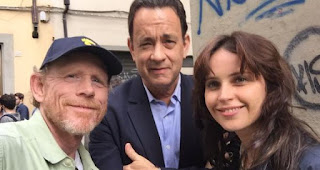