Movie Review: "Holy Throwback!" "Batman: Return of the Caped Crusaders" Is a Delight 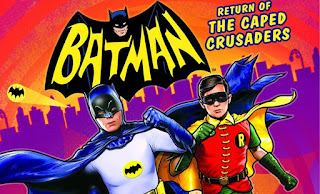 
The 1960s Batman series has long been somewhat divisive in fan circles, dismissed by many for its severely campy version of what you would never call the Dark Knight. But with the darker, grittier version of the character now firmly implanted in the public conciousness, it seems fans are more kindly disposed toward the caped crusaders of camp and their place in the annals of Batdom. For those of us whose first childhood exposure to Batman was through the series (15 years old reruns in our case), we didn't know it was campy or silly. To us at the time it was the coolest, most exciting adventure show out there, and only later did we realize how tongue-in-cheek the whole thing was. We're firmly in the camp that feels you can love both Adam West and Christian Bale's takes on the character and (almost) everything in between, and there is no one and only definitive Batman.  But if you're not a fan of West and Burt Ward's silly, cartoony heroics, the new animated film Batman: Return of the Caped Crusaders isn't for you. But for us it was easily the most fun and satisfying of the multiple live-action and animated appearances Batman has made in 2016.

The new film is set in the same time period as the original series, arguably taking place before Season 3 since the late Yvonne Craig's Batgirl is never mentioned. Bruce Wayne and his teenage ward Dick Grayson (again voiced by West and Ward) are relaxing at Stately Wayne Manor watching the variety show Gotham Palace when the musical guests turn out to be the Big Four supervilains in disguise: The Joker, The Riddler, The Penguin and Catwoman  (Julie Newmar, the only survivor among the original felonious foursome, reprises her role while the others are portrayed by experienced voice actors invoking the voices and personae of the late Caesar Romero, Frank Goshen and Burgess Meredith). This leads to what begins as a typical game of Bat and Mouse with the villains, until an unexpected twist turns Gotham City upside down.

The story is, of coursd, profoundly silly, and that's exactly right. Like the wonderful Batman '66 comic book series, this film is clearly created by fans whose love of the material shines through. Though it does at times become more overtly jokey than the comic, it wisely toes the lone between overt parody and playing it straight, and pills of some big laughs (including thinly veiled references to the Tim Burton and Christopher Nolan films and an outrageous sequence of the Joker getting his just desserts).  Overall the tone of the series has been captured very well, but animation allows for spectacular action set pieces than were allowed by limited budget and West's fairly meager athletic abilities.

It's an absolute treat to hear West, Ward and Newmar reprising their legendary roles, thought it takes some time to get used to how old they sound. West occasionally sounds almost drunk, the aging Ward bears a surprising auditory resemblance to Mark Hamill, and Newmar is a strange mix of sex kitten and sweet old Grandma. But once you're settled in it's surprisingly easy to get past this and thoroughly enjoy their return, and the voice actors taking on the duties of both the villains and supporting players (such as Commissioner Gordon and Police Chief O'Hara) capture them expertly.

All in all, we got exactly what we wanted from Batman: Return of the Caped Crusaders, and unlike such debacles as Legends of the Superheroes and Return to the Batcave, this one is worth watching again and deserved an honored place on the shelves of fans, right next to the Blu Rays of the series. It's a delightful nostalgic romp that will also be great fun for children who are too young for the other animated Batman films DC is currently putting out (it's certainly a far cry from The Killing Joke). We look forward to the already announced sequel and we'll be there to enjoy it, same Bat-time, same Bat-channel.