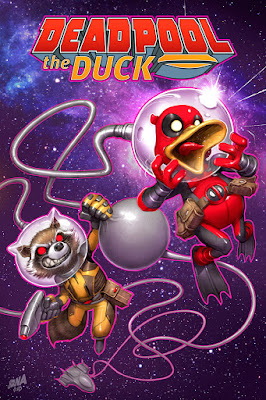 What do you get when you take one cynical anthropomorphic duck(named Howard) and cross it with the smelliest (and most annoying) mercenary in the Marvel Universe? DEADPOOL THE DUCK! Launching this coming Janurary, its high-stakes avian antics as two of Marvel’s most beloved, and crass, heroes merge for an all-new series brought to you by Stuart Moore (CLOAK & DAGGER, THANOS: DEATH SENTENCENovel) and Jacopo Camagni (DEADPOOL’s SECRET SECRET WARS).

When Deadpool is sent on a mission from S.H.I.E.L.D. to capture a high-profile E.T. that is rampaging across the high plains, the snatch-and-grab turns out to be much more complicated than the Merc with a Mouth anticipated. One unfortunate wrong place at the wrong time accident later leaves Deadpool and Howard fighting for control as the newest mercenary of the Marvel Universe!

Speaking with Comic Vine, DEADPOOL THE DUCK writer, Stuart Moore, spoke towards what readers can expect as these two characters share the same dark space, “Deadpool is one of Marvel’s funniest characters because he’s just a violent kid at heart, a quasi-cartoon who’s happiest when he can punch and shoot his way out of a problem. Howard is Marvel’s other funniest character, but his humor is much more verbal, more sarcastic and satirical. Putting them together was one of the most fun experiences I’ve had writing a comic.” 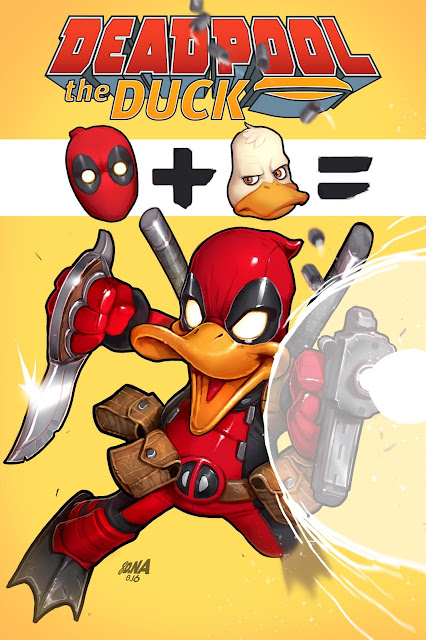 DEADPOOL THE DUCK #1 will be arriving in stores this coming January from Marvel Comics.