Fathom Events and BBC AMERICA Present ‘Doctor Who: The Power of the Daleks’ Animated Series in Cinemas this November 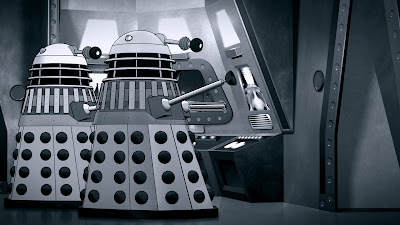 Fathom Events and BBC AMERICA Present ‘Doctor Who: The Power of the Daleks’ Animated Series in Cinemas Nationwide for One Night. Featuring Patrick Troughton’s Debut as the Doctor
Special Cinema Event on November 14 Only, in Advance of BBC AMERICA Premiere on November 19

DENVER – October 12, 2016 – BBC AMERICA and Fathom Events announced today a one-night special theatrical screening event of “Doctor Who: The Power of the Daleks” animated series on Monday, November 14, 2016 at 7:00 p.m. local time – 50 years after the original BBC broadcast – in advance of the premiere on BBC AMERICA on Saturday, November 19, 2016 at 8:25 p.m. ET. The cinema event will also feature exclusive bonus content including interviews with members of the original cast.

Tickets for “Doctor Who: The Power of the Daleks” can be purchased online by visiting www.FathomEvents.com or at participating theater box offices. Fans throughout the U.S. will be able to enjoy the event in select movie theaters through Fathom’s Digital Broadcast Network. For a complete list of theater locations visit the Fathom Events website (theaters and participants are subject to change).

It’s one of the most celebrated Doctor Who adventures, and yet no complete film recordings of The Power of the Daleks are known to have survived. The master negatives were destroyed in an archive purge in 1974. This brand new animation, being released 50 years after its only UK broadcast, is based on the program’s original audio recordings, surviving photographs, and film clips. The six-part adventure features the regeneration – or as it was then called “renewal” – of First Doctor, William Hartnell, into Second Doctor, Patrick Troughton, and follows the Time Lord and his companions Polly (Anneke Wills) and Ben (Michael Craze) as they do battle with the Daleks on the planet Vulcan.

“Ahead of the premiere on BBC AMERICA we wanted to give fans a chance to watch this unique content on the big screen. It is a rare treat to be able to bring the lost episode, Power of the Daleks, to life using modern animation techniques. Doctor Who cinema events have been incredibly successful, and this is extraordinary opportunity to allow a new generation of fans the opportunity to experience this classic adventure for the first time,” said Soumya Sriraman, EVP, Franchise and Digital Enterprise, BBC Worldwide North America.

“We’re pleased to continue our long-standing and successful partnership with BBC AMERICA to bring more fantastic Doctor Who content to the big screen,” said Fathom Events Vice President of Programming Kymberli Frueh. “The Whovians are always one of our biggest and most passionate group of fans at the cinemas.”

“Doctor Who: The Power of the Daleks” is produced and directed by Charles Norton, with character designs from acclaimed comic book artists Martin Geraghty and Adrian Salmon.

Since its launch in 1963, Doctor Who has become one of the world’s best-loved dramas and is certified by the Guinness Book of World Records as the most successful sci-fi series ever. Doctor Who is BBC AMERICA’s highest-rated series and has received numerous awards across its 53 years. The series set new records in 2013 with a global simulcast event of the 50th anniversary special on television and in theaters, in partnership with Fathom Events in the U.S. Doctor Who returns with a Christmas Special in December and new season in Spring 2017 on BBC AMERICA.