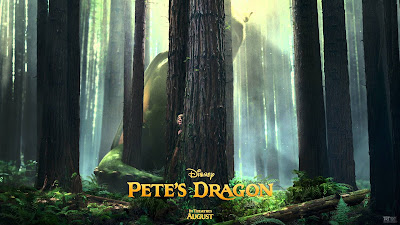 
2016 has been a banner year for Disney in terms or quality and, for the most part, at the box office. "Pete's Dragon", the latest of studio's remakes of their classic titles, extends the streak of the former and stands a good chance of contributing to the latter. Of course, the term "classic" is stretched a little further here than it was with some of the previous films: the original 1977 version of "Pete's Dragon" is undeniably a beloved part of many childhoods, including ours. But let's be honest, it's an overlong, uneven, and slightly odd film that wasn't terribly well received upon its initial release (it carries only a 48% positive rating among critics on Rotten Tomatoes, and a better but hardly outstanding 61% from audiences). And unlike the other films Disney has recently remade, it's hardly timeless and doesn't have a large following among the kids of today. This undoubtedly is why the Mouse House felt comfortably taking a much less literal approach to this remake, taking the basics of the story and updating then to a 21st century setting. 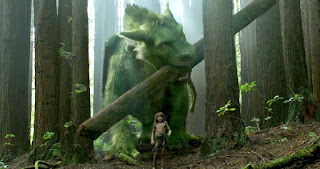 As the film opens, 5 year old Pete (Oakes Fegley) becomes lost in the forest as a tragic accident claims the lives of his parents. He soon encounters a friend and protector in the form of a large dragon, whom he names Elliott after a lost puppy in a children's book. As in the original, Elliott has the general characteristics of an enormous dog, and also has the power to turn himself invisible. Mercifully, however, the remake ditches the family of "Deliverance" bit players who served as Pete's abusive guardians. It does, however, bring back the old man who believes in dragons and more practical daughter who doesn't, this time in foam of Robert Redford and Bryce Dallas Howard. Howard is Grace, a forest ranger who knows the woods better than anyone and believes her father's stories of seeing the famed Millhaven Dragon are just stories. But when Pete is discovered by the young daughter (Oona Laurence of "Southpaw") of Grace's fiance (Wes Bentley), stories of the dragon come to the forefront again. 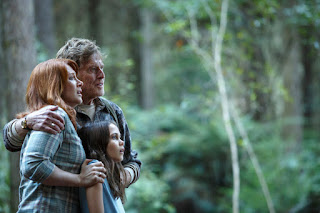 "Pete's Dragon" is a simpler,  more straightforward story than its predecessor,  and has a sweeter, more wistful tone. The cast gives strong performances all around, with Fegley and Laurence doing sensitive work that belies their young ages, and Howard once again showing an abundance of charm and screen presence. But among the human players Redford is easily the standout, providing the most entertaining performance the legendary star has given in many a year. Karl Urban also impresses as Bentley's brother, the nominal villain of the piece, but this time he's merely misguided rather than being the overt scoundrel played by Jim Dale. 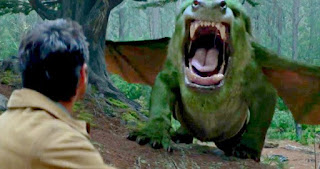 Director David Lowery, who made a name for himself with the indie drama "Ain't Them Bodies Saints" is a surprising choice to take on a family friendly Disney title, but it turns out to be an excellent match of director to material. Lowery not only makes the most of the gorgeous New Zealand forest visuals, but brings a low-key warmth and a huge amount of heart. Both visually and tonally, Lowery seems influenced by Steven Spielberg,  especially "E.T." (we found ourselves almost wishing Lowery had made Pete get the name "Elliot" from an "E.T." storybook.). The relationship between Pete and Elliott is still the heart and soul of the film, and the emotion is genuine and never feels too manipulative or maudlin. The film elicits laughter and tears and shows that Lowery is a director to watch for in the future.

The effects are supervised  by WETA wizard Joe Letteri, who already brought a gentle creature to life this summer in "The BFG", and Elliott is another great piece of work from this digital Harryhausen. The character is both impressive and lovable, and if he didn't work the film wouldn't.  But he does, and "Pete's Dragon" is an utter delight either for fans of the original who are willing to go with a different take on the material, or with newcomers being introduced to Pete and Elliott for the first time. It continues to establish Disney's live action remakes and the most unlikely franchise to rank among our current favorites. If they keep them up as good as the last three have been, we're more than happy to see them keep coming. 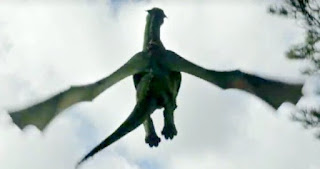