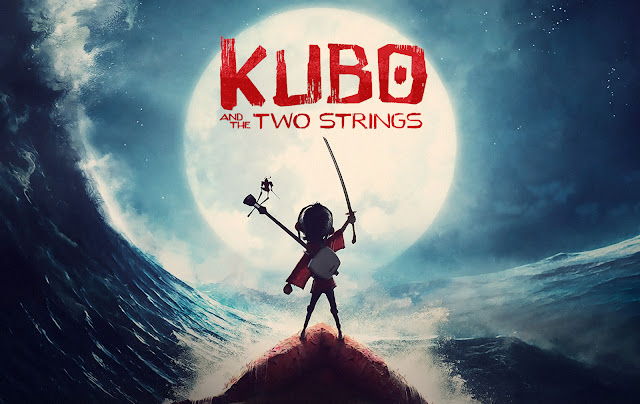 When was the last time you left a movie feeling you'd just seen something truly original? Not only not a sequel, remake or reboot, but an actual new story that stood entirely on its own without feeling like a variation on anything else? Laika animation studios has given us just that. They seem to get better with each movie, and The Boxtrolls was a terrific film. But with Kubo and The Two Strings, the relatively young animation studio has risen to the level of Pixar at it's very best and firmly establishes itself as one of the most exciting filmmaking entities currently in existence. 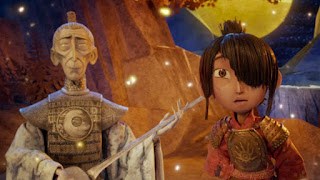 Set in ancient Japan, the story centers around a young boy named Kubo (Parkinson), who lives in a provincial village and juggles his time between caring for his sick mother and working as an entertainer, playing the guitar and performing magic. But when a spirit from the past changes everything, Kubo finds himself relentlessly pursued by gods and monsters. In order to survive, Kubo must locate a magical suit of armor once worn by his late father, a legendary Samurai warrior.

His only allies on his journey are a wise but bossy Monkey (Theron), and a dim witted Beetle (McConaghey.). The three must move swiftly, as a sinister pair of Witches (voiced by Rooney Mara) are right on their heels, and in the end, Kubo must face down a powerful enemy. 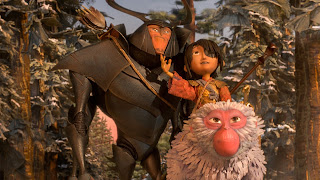 This is a dazzling adventure that stirs every emotion imaginable, and a visual feast that will leave you completely satisfied.  Nobody else today does animation quite the way Laika does, with stop motion so fluid it can be easily be mistaken for CGI. Calling it a perfect visual blending of Tim Burton, Ang Lee and even Akira Kurosawa at their best doesn't quite do the movie full justice, because it doesn't give the film credit for having a strong visual identity of its own. It's amazing to see some of the most thrilling fight and action scenes play out in stop-motion animation (the film has a credited fight choreographer,  and it shows.). The script is funny, touching, full of brilliant twists, and at its best moments, it is profoundly moving First time director Travis Knight establishes himself as a talent to pay close attention to in the future.

The performances are outstanding, and not only are the big Hollywood names not a distraction, they  are nearly unrecognizable (okay, McConaghey doesn't sound very Asian, but he doesn't sound like he's from Texas, either. It's a vocal transformation as impressive as his physical one in Dallas Buyer's Club.). And the musical score by Dario Mariannelli is a masterpiece in its own right.

Kubo is so good and it is being so well received that it stands a chance of giving Finding Dory and Zootpoia a run for their money, even if it won't approach that kind of box office impact.

Do yourself a favor, and don't mistake this for a video to buy to keep your kids busy. This is a thoughtful and exciting adventure, an epic art film to be experienced on the big screen, preferably in 3D. This is the kind of film that reminds us what the medium can achieve when it is filled with artistry and love.