Movie Review: "Star Trek Beyond" Is a Satisfying Voyage 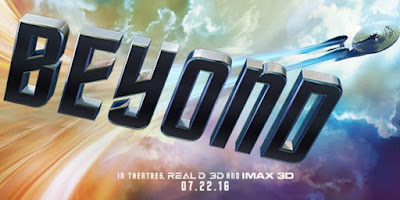 
With the return of Star Wars, it's easy for the Star Trek franchise to get lost in the excitement. Sometimes it seems as if fans (or J.J. Abrams) only have room for one or the other at a time, and since, in the past, new Star Wars adventures have come along less frequently, Gene Roddenberry's sci-fi franchise seems to lose some of its luster by comparison. Personally, we've always rejected the idea that fans had to choose between the two, and hope that Star Wars mania doesn't hurt enthusiasm for the rebooted Trek series. As the new installment,  Star Trek Beyond proves, there's plenty of life left in the voyages of the starship Enterprise. 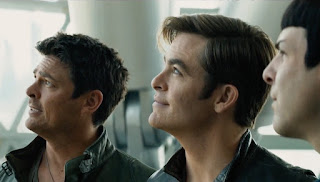 Picking up well after the last installment, 2013's Star Trek Into Darkness, Beyond finds the crew three years into their legendary five-year mission, and both Captain Kirk (Chris Pine) and Mr. Spock (Zachary Quinto) are feeling uncertain about their future with starfleet. Spock has received some unsettling news, and Kirk is still wrestling with the ghost of his father. However, a distress call snaps them back into action,  and soon the Enterprise crew find themselves stranded on an alien world and in conflict with an enigmatic foe named Krall (Idris Elba).

As far as story is concerned, Star Trek Beyond is a more standard and self contained Trek adventure than the epic scale save-the-galaxy stories of either of its predecessors, and that relative smallness actually works in the film's favor. We needed at least one film for this crew that felt like a fairly standard episode to get the feel of that five-year mission and the regular dynamic of life aboard the Enterprise, and if they have to save Earth and/or the galaxy (or Alpha Quadrant, whatever you want to call it) in every installment it becomes routine.

But of course the plot is only half the fun of Star Trek, with the beloved characters being of at least equal importance, and once again the new crew shines. Pine is engaging and charismatic as always,  and ably supported by the rest (it's particularly gratifying to see the late Anton Yelchin given a lot of screen time in his final appearache as the lovably exuberant Ensign Chekov). The standouts this time are, not so surprisingly, Quinto's Spock and Karl Urban's Dr. McCoy,  who are wisely placed together for the majority of the film and given a chance for their character relationship (the most fun dynamic in all of the Trek universe) to develop. These two have nearly perfected their characters, and the interplay between them is both funny and touching. 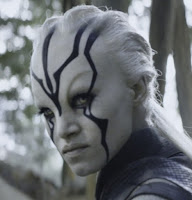 A new addition to the cast is Kingsman's Sofia Boutella as an alien named Jaylaah. Boutella shows again that she has dazzling martial arts skills, but this time also demonstrates genuine acting talent, and is a strong and likable prescence. As Krall, the immensely talented Elba may be given the weakest character of the rebooted series' villains, but he's formidable as always and in the film's third act the character becomes more intesting than he previously appeared to be. 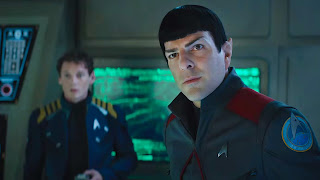 Abrams has handed directorial duties over to Fast and Furious Helmer Justin Lin for this installment, and allowed him to utilize his own visual style rather than aping J.J.'s (we don't even see much in terms of lensflares until near the end of the film). It's no surprise that Lin can handle the action well, but it would be a mistake to write him off as just an action director because we know him from a franchise known primarily for car chases. He proves more than capable with the story and character demands here. Screenwriters Doug Jung & Simon Pegg are clearly fans, and their fondness for and understanding of the universe in which theyre writing adds an immensley satisfying element to the film. Perhaps best of all, they try admirably to give the entire crew their moments to shine (if anyone gets short shrift it's John Cho's Sulu, with the much talked about revelation that the character is gay being understated to almost a "blink and you'lll miss it" degree). Pegg, of course, also plays the role of Chief Engineer Montgomery Scott, and seems to have taken advantage of his co-writer status to pad his part a little, which is welcome as Scotty is always a highlight of the new films.

In the end, Star Trek Beyond is a joyous continuation of the beloved franchise, and it turns out to be surprisingly satisfying and appropriate to celebrate the 50th anniversary of Trek with more of a regular episode than some sort of major, universe changing event. The touching way the film pays tribute to the late, great Leonard Nimoy not only satisfactorily ties it into the big picture of the franchise but leaves us with a hopeful and comforting feeling that Star Trek will live long and prosper. Like any good Star Trek installment, it left us feeling immersed in the familiar universe and dying to see what comes next. The only disadvantage to the film playing like an episode is that it becomes all the harder to accept that we won't get another one next week.