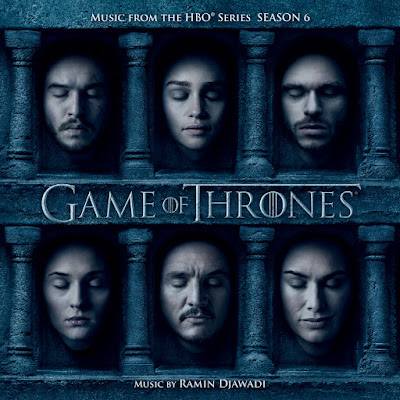 The new season 6 Game of Thrones® soundtrack is now available for pre-orders from the HBO Shop. The album features music from the award-winning HBO® Series Game Of Thrones® by composer Ramin Djawadi.


The album is currently available at digital retailers and will be purchasable on CD from 29 July, and on a 3-disc vinyl set 30 September.
Seven bonus tracks are available on the digital and vinyl configurations for a total of 26 tracks. The CD includes 19 songs and a code to download the bonus tracks. Additionally, the vinyl set features exclusive etched vinyl art.
Composer Ramin Djawadi (Iron Man, Pacific Rim, Person of Interest), has written the music for the entire series, and was once again brought in to create the musical landscape for Season 6. “ Season 6 of Game of Thrones has been incredible,” he enthusiastically explained. “I’m excited to be able to now share the music on this extended album.”
The Game of Thrones (Music from the HBO® Series) Season 6 soundtrack can be preordered at HBO Shop (www.hboshopeu.com) for £12.99
The full track list is as follows:
Main Titles
Blood of My Blood
Light of the Seven
Needle
Coronation
Feed the Hounds
My Watch Has Ended
The Red Woman
Hold the Door
Khaleesi
Maester
A Painless Death
Reign
Let's Play a Game
Bastard
Trust Each Other
Winter Has Come
Hear Me Roar
The Winds of Winter
Lord of Light (Bonus Track)
Service of the Gods (Bonus Track)
I Need You by My Side (Bonus Track)
The Tower (Bonus Track)
Unbowed, Unbent, Unbroken (Bonus Track)
I Choose Violence (Bonus Track)
Hodor (Bonus Track)
The Bearded Trio - The Site For Steven Spielberg, George Lucas and John Williams
THE BEARDED TRIO ON FACEBOOK
THE BEARDED TRIO ON TWITTER
THE BEARDED TRIO ON GOOGLE+
THE BEARDED TRIO ON PINTEREST
CLICK HERE FOR FACTS ON STEVEN SPIELBERG
CLICK HERE FOR FACTS ON GEORGE LUCAS
CLICK HERE FOR FACTS ON JOHN WILLIAMS